Hyun-A to play South by Southwest

Hyun-A to play South by Southwest 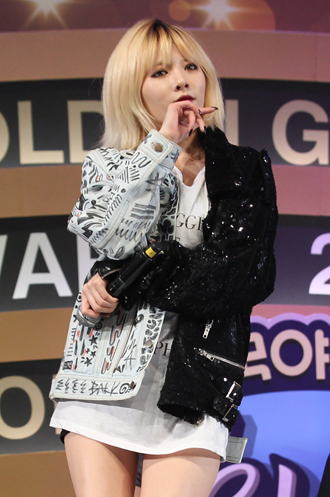 Kim Hyun-A, of the girl group 4Minute, is heading overseas for a most unusual concert for a K-pop star: the huge modern music showcase South by Southwest.

The Texas-based SXSW is one of the biggest music events in the world, with about 2,000 acts performing each year, and in recent years Korean indie bands have become staples there; this year, about a dozen groups are on the card.

But on occasion, K-pop makes the bill, too. Last year, f(x) played a gig at SXSW, and this year Hyun-a got the nod.

Hyun-a may not be the biggest name in K-pop, but thanks to her song “Bubble Pop” and appearance in Psy’s “Gangnam Style,” which has more than 1.8 billion YouTube views, she is somewhat known outside of Korea.

It’s not the first time the sexy star has been singled out in the West, having been named as the first Korean singer to enter Billboard’s “21 Under 21” in 2011 and having had her song “Bubble Pop” picked by Spin magazine’s as one of its top songs of 2011.