Maddux certain to get Hall of Fame nod

Maddux certain to get Hall of Fame nod 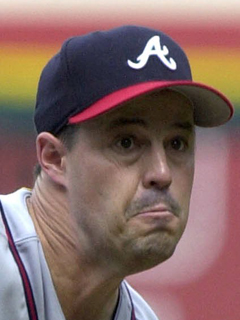 Greg Maddux could break a 22-year-old record Wednesday, though he won’t become the first unanimous selection in the history of the baseball writers’ Hall of Fame ballot. When Tom Seaver received 425 of 430 votes in 1992, his 98.84 percentage topped the mark set by Ty Cobb in 1936. A dominant pitcher when offense ruled in the Steroids Era, Maddux has a chance to enter Cooperstown with a little extra bit of fame.

“I just have just never come across any human being, whether they’re a voter or just a fan, that doesn’t think Greg Maddux is a Hall of Famer and one of the greatest pitchers who ever pitched,” The Boston Globe’s Nick Cafardo said Tuesday. “I can’t imagine someone not voting for him. So I would guess that he’s going to break Seaver’s record.”

Holdovers include Craig Biggio, who topped voting at 68 percent last year, 39 votes short of the 75 percent needed for election. It was only the second time in four decades the BBWAA failed to elect anyone.

Ken Gurnick of MLB.com, a former reporter for the Los Angeles Herald Examiner, said Tuesday the only player he voted for was Jack Morris, on the writers’ ballot for the 15th and final time after falling 42 votes shy last year.

“To me, I didn’t exclude Maddux. I excluded everybody from that era, everybody from the Steroid Era,” Gurnick said. “It wasn’t about Greg Maddux, it was about the entire era. I just don’t know who did and who didn’t.”

Gurnick said Morris also was the only player he voted for in 2013 and added he intends to abstain in future elections.

“Some people quibble over when the era starts, but the bulk of his career was in my opinion well before all of the widespread use of performance-enhancing drugs,” Gurnick said. Given that 569 ballots were submitted in 2013, Maddux likely could be omitted from six this year and still break Seaver’s record.