Sunderland sends Man-U to its third loss in a row

Sunderland sends Man-U to its third loss in a row 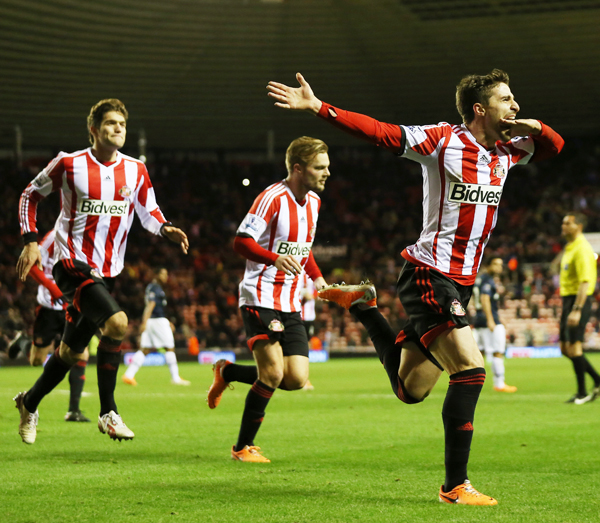 Fabio Borini celebrates with teammates after scoring the second goal for Sunderland on Tuesday at the Stadium of Light in England. [REUTERS/NEWS1]

Manchester United slumped to a third consecutive loss for the first time in nearly 13 years when Sunderland added to Manager David Moyes’ troubles by winning the first leg of their League Cup semifinal 2-1 on Tuesday.

The setback against the Premier League’s last-place team completed a hat trick of 2-1 losses at the start of 2014 for Moyes, in his first season as Alex Ferguson’s successor.

United, which won the Premier League by 11 points last season before Ferguson retired, trails leader Arsenal by 11 points after losing to Tottenham on New Year’s Day.

And the FA Cup quest ended at the first hurdle on Sunday when Swansea won their third round meeting at Old Trafford.

“[The fans] know we are going through a difficult time,” Moyes said. “They have probably never seen it as bad as this for a long time. But I am determined to put it right, I’m sure we will.”

The Red Devils can still reach the League Cup final at Wembley if they overturn the deficit at Old Trafford on Jan. 22.

Sunderland’s victory was secured from the penalty spot in the 65th minute by Fabio Borini after United midfielder Tom Cleverley tripped Adam Johnson.

Sunderland took the lead when 40-year-old United veteran Ryan Giggs inadvertently bundled the ball into his own net just before halftime when under pressure from Phil Bardsley.

Nemanja Vidic headed United level seven minutes into the second half before - according to Moyes - United was thwarted by a poor decision by referee Andre Marriner in awarding the penalty.

“I feel we are having to play the opposition and the officials at this moment in time,” Moyes said on United’s in-house television station.

“Maybe I’ve got to understand that’s what happens at Man United. But if we do, we certainly aren’t getting much in our favor at this moment in time.”

The outlook isn’t completely bleak for the Scot, with his team still in the Champions League and facing Olympiakos in the round of 16 next month.

The 72-year-old Ferguson continues to loom large over his successor, watching at the Stadium of Light in his role as a United director on another miserable night for the club he managed for more than 26 trophy-laden years.

With Robin van Persie and Wayne Rooney injured, Moyes was relying on Danny Welbeck for goals. However, the striker was shackled by a defense including former United defenders Wes Brown and John O’Shea. United was the first team to have the ball in the net, but Adnan Januzaj’s effort was ruled out on the ground where he scored twice on his debut in October because Giggs was adjudged to be in an offside position.

Sunderland sprang into life as the first half was ending, with Bardsley driving a low shot at United goalkeeper David de Gea before the hosts went in front.

Seb Larsson whipped in a free kick that was met at the far post by Brown, who squared the ball across the goalmouth before Giggs turned it into his own net.

Having dominated before the break, it seemed United would stage a comeback when it equalized early in the second half. Vidic soared above former teammates O’Shea and Brown to head home Cleverley’s corner.

But shortly after De Gea blocked Larsson’s sliced strike, the United goalkeeper found Borini’s spotkick unstoppable as it went high into the net. The players, like Moyes, blamed the referee. “It’s getting laughable now the decisions aren’t quite going for us,” Giggs said.

For Sunderland, the focus is now on topflight survival with the northeast England club.