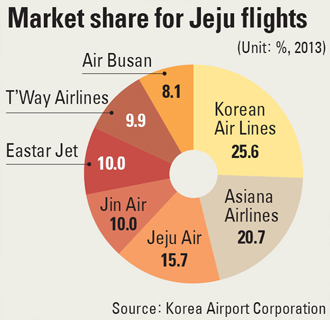 Low-cost carriers are steadily expanding their domestic presence, with their market share for Jeju flights exceeding 50 percent last year for the first time.

According to data from Korea Airports Corporation, 18.23 million people took flights from Jeju in 2013 and 9.79 million, or 53.7 percent, of them used LCCs. Jeju is considered the core route for local carriers as it accounts for 80 percent of domestic air passenger traffic.

Jeju Air, the nation’s largest LCC with the most Jeju flights, had the top market share among LCCs at 15.7 percent, followed by Jin Air and Eastar Jet, which each had 10 percent. The nation’s top two carriers - Korean Air Lines and Asiana Airlines - saw their Jeju market share decrease. KAL lost 3.7 percentage points to 25.6 percent, while Asiana slipped 0.4 percentage point to 20.7 percent during 2013.

For Gimpo-Jeju flights, the most popular domestic route and the only one where all seven domestic carriers compete, LCCs served 7.25 million passengers, or 59.3 percent of the total.

Jin Air was the best performer among LCCs with a 15.2 percent market share, edging T’Way Airlines by 0.3 percentage point. KAL’s share was 20.8 percent and Asiana’s 20 percent.

Industry insiders say LCCs will continue to expand this year as they add flights and offer aggressive promotions.

Jin Air will award 1,000 free tickets by Jan. 16 through its online event celebrating its 10 millionth passenger.