Samsung serves up its Chef Collection

Samsung serves up its Chef Collection 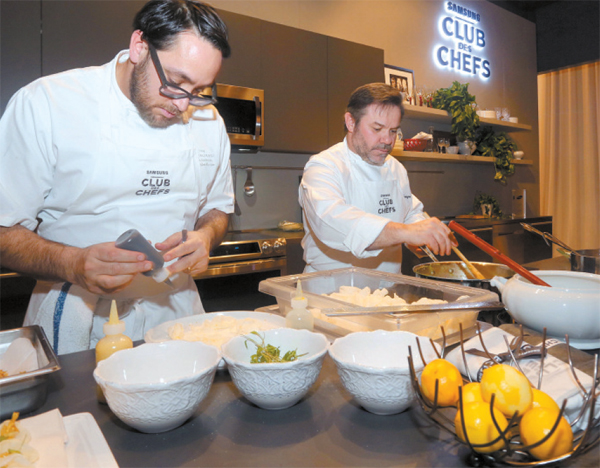 The outcome of Samsung’s Club Des Chefs initiative, the Chef Collection, includes a 34-cubit foot refrigerator - the world’s largest in premium home refrigerator products, according to the company.

Equipped with the latest technology, the fridge can preserve meat and fish “as fresh as they can be,” the company said. The package also features electronic ovens and dishwashers.

“The Chef Collection, the outcome of the insights gleaned from the best experts in the industry and of its application to kitchen appliances, has put in one place the gems of the innovative technologies with which one can master the whole range of cooking,” said Eom Young-hoon, executive vice president of sales and marketing at Samsung’s Digital Appliance business. “With it, Samsung Digital Appliance will make a new standard for next-generation home appliances.”

The Chef Collection refrigerator has the same external size as the T9000, Samsung’s 900-liter (237.8-gallon) refrigerator, but the company reduced the width of the internal wall by at least 30 percent.

The fridge, the company said, optimizes humidity using an innovative triple cooling system. It also has some unique features, such as the Chef’s Pantry, which has optimal temperature control, and the Chef Pan, a container that can be an oven or a dishwasher.

Its home-appliance rivals also came up with their own versions of kitchen appliances. Japan’s Panasonic displayed kitchen appliances made in collaboration with The Taste, a chef survival show in the United States.

Meanwhile, LG Electronics on Tuesday revealed an ambition to strengthen its television business. “We will roll out at least one or two (television) products every year that can lead the market,” LG’s Home Entertainment President Ha Hyun-hwoi said in a meeting with reporters.