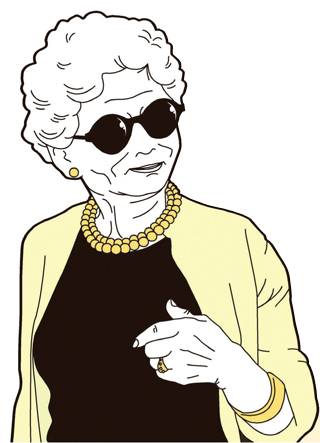 Tight leggings and skinny jeans are must-buy items for Park Yeon-hee, 68, whenever she goes shopping for pants at a department store near her residence in Yangjae-dong, southern Seoul. Although she is in her late 60s, she often shares clothes with her daughter in her early 40s and enjoys trendy apparel from Uniqlo and Zara.

“The clothing style of my friends is also similar to that of mine,” says Park. “When I wear loose clothes, my friends say my style is ‘countrified.’?”

On a recent visit to the Crocs store on the seventh floor of Lotte Department Store in Sogong-dong, central Seoul, about 30 percent of customers looked to be aged 60 to 75.

“It’s been two years since I started working at this branch, and the number of customers aged 60 to 75 has jumped by more than 20 percent,” says Lee Ha-neul, the 23-year-old store manager. “Women in their 70s with gray hair often come and buy colorful shoes with high heels of up to 7 centimeters [2.75 inches].”

The scene is similar at the Giordano store at Lotte Department Store’s Pyeongchon branch in Anyang, Gyeonggi, where about 20 percent of customers shopping for clothes are in their 60s or older.

“Although this department store branch is popular among young customers, the number of visits by well-aged people have increased significantly overall, and they actually end up buying items,” says Song Young-beom, a deputy manager at Giordano.

He adds that, compared to 2012, he thinks the number of customers aged 60 or older increased by 15 percent last year.

According to the Organization for Economic Cooperation and Development and the Ministry of Strategy and Finance, people aged 65 and older will represent at least 14 percent of the Korean population by 2018. And in response to such demographic changes, businesses are busy coming up with marketing ideas that target the so-called “silver” generation.

However, there had been no systematic analyses of what brands older people like and what products and items they purchase. Lotte Department Store, meanwhile, was the first in the industry to analyze the purchasing patterns of 460,000 customers aged 60 to 75. They are among the 7.5 million customers who have Lotte memberships. The analysis was done by Lotte’s customer relationship management team. 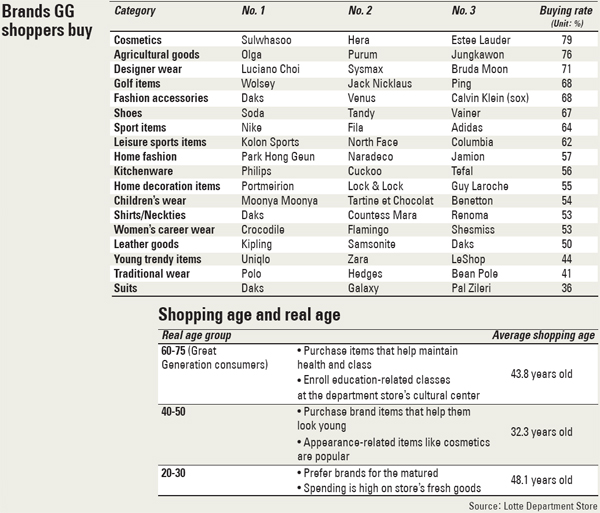 The team looked into the top 20 percent of spenders and found that older people with purchasing power shop like consumers in their 40s.

The store’s team also calculated the so-called shopping age for items and brands members of the older group buy most, and it showed the average shopping age was 43.8 years.

Each brand at the retailer has a shopping age. For example, Marc Jacobs’ shopping age is 38.2 years old, while True Religion’s is 37.8 years old. So the top 20 percent of consumers aged 60 to 75 bought products from brands that consumers in their 40s like the most.

Lotte Department Store named the top 20 percent of spenders aged 60 to 75 as “Great Generation” customers. The retailer said Great Generation customers buy products that target younger people. The term Great Generation is rooted in American journalist Tom Brokaw’s 1998 book, “The Greatest Generation. “It is, I believe, the greatest generation any society has every produced,” wrote Brokaw, referring to the generation that survived the Great Depression and World War II.

Lotte Department Store said its Great Generation customers also are people to be proud of because they endured Korea’s industrialization and democratization.

Among shoe brands, the comfort shoe brand Vainer ranked as third-most popular behind Soda and Tandy, brands that are often sought by young people.

“Consumers aged between 60 and 75 that have spending power don’t like themselves being called old people or seniors,” says Jung Seung-in, a marketing officer at Lotte Department Store. “They experienced both Korea’s industrialization and democratization and they also have piled up personal wealth, which is something society should respect. That’s why we decided to call them the Great Generation consumers.”