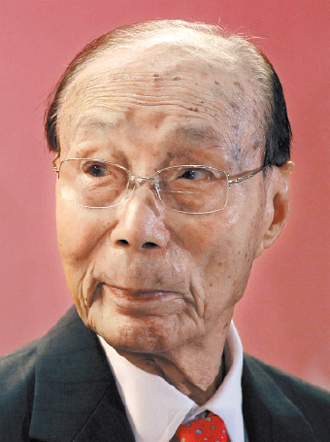 No cause of death was given in a statement from Television Broadcasts Limited (TVB), which Shaw helped found in 1967.

His Shaw Brothers Studios, once among the world’s largest, helped launch the careers of powerhouses including director John Woo and churned out nearly 1,000 movies. His television empire helped actors including Chow Yun-fat rise to fame. He also produced a handful of U.S. films.

Other stars rose to fame through Shaw’s television station TVB, which remains a dominant force in Hong Kong. Wong Kar-wai, the director behind critically acclaimed art-house movies like “Chungking Express” and “In the Mood for Love,” got his start through a TVB training course and worked at the station briefly as a production assistant.

Ironically, one actor who slipped through Shaw’s grasp, Bruce Lee, went on to become the world’s biggest kung fu star.

Shaw produced a handful of U.S. films, including “Blade Runner” and 1979 disaster thriller “Meteor.” He led Hong Kong’s Television Broadcasts until retiring as chairman in December 2011 at the age of 104.

Shaw was born near Shanghai to a wealthy textile merchant. One of his six siblings, elder brother Runme Shaw, set up a silent film studio, Unique Film Production. Shaw and a third brother, Runje, went to Singapore in 1923 to market films to southeast Asia’s Chinese community and eventually opened 139 movie theatres across the region.

After surviving World War II, the company was faced with growing competition from rivals in Hong Kong and Singapore, so Shaw moved to Hong Kong in the late 1950s to modernize the company. He shifted focus from exhibiting films to producing them and renamed the company Shaw Brothers.

His path to Asian moviemaking dominance began in earnest in 1961 when he opened Movie Town, a vast, state-of-the-art studio in Hong Kong’s rural Clearwater Bay. With 1,500 staff working on 10 soundstages, Movie Town was reputed to be the most productive studio in the world. At its busiest, actors and directors churned out 40 movies a year, most of them featuring kung fu, sword fighting or Asian gangsters known as triads.

The result was a library of nearly 1,000 movies such as “The One-Armed Swordsman” and “The Five Fingers of Death,” the latter being one of Shaw’s most successful in the United States.

The studio’s logo - the initials SB on a shield - was inspired by the Warner Brothers emblem, in a nod to its Hollywood aspirations. It came full circle when Tarantino appropriated the Shaw Brothers logo for use in his two “Kill Bill” movies, which were in homage to the studio and other Hong Kong martial arts movies.

“For a year, I’d watch one old Shaw Brothers movie a day - if not three,” Tarantino told the Los Angeles Daily News in 2003, discussing his preparation for filming.

Films were produced with assembly-line methods and stars and technical staff lived in dorms on site. Budgets were low and production schedules were quick - 35 days to three months, according to a 1976 Time magazine report.

“I told Sir Run Run to forget it,” Chow told Asiaweek magazine in 1983. “I said I did not think I could keep my job because the pictures were so bad,” said Chow, whose comments earned him a promotion to production.

In their heyday, Shaw films were reportedly seen by 1.5 million people a week, many of them in the cinemas owned by Shaw and his brothers in southeast Asia. AP