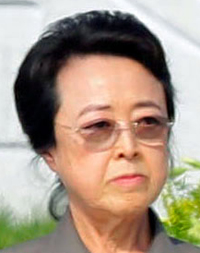 WASHINGTON - Kim Kyong-hui, aunt of North Korean leader Kim Jong-un and wife of the purged and executed Jang Song-thaek, is in a vegetative state after undergoing brain surgery, a source told the JoongAng Ilbo.

An intelligence official in the United States said on condition of anonymity yesterday that Kim Kyong-hui had surgery for a brain tumor in 2013 in Paris.

After the surgery, she lost a lot of weight, dropping to 35 kilograms (77 pounds), the official said.

The official denied some Korean reports alleging she committed suicide and maintained that she is still alive.

A U.S. government official said Kim gave her “tactical agreement” to the killing of her husband, Jang, last month.

Jang, who was once regarded as political protector of Kim Jong-un and the second-most powerful figure in the country, was purged and brutally executed for treason on Dec. 12, 2013.

North Korea’s state media released a photo of him at a tribunal and reported his crimes in depth.

His wife, Kim, the only sister of late leader Kim Jong-il, attended the military parade to mark the 65th anniversary of the founding of the North Korean regime on Sept. 9, 2013. She also appeared watching a musical performance by the North Korean Army with her nephew Kim Jong-un and first lady Ri Sol-ju the next day, Sept. 10.

Since then, she has not appeared in state media.

Kim’s disappearance spawned allegations that she died in the aftermath of the execution of her husband, possibly by committing suicide.

However, Lee Jung-hyun, the senior presidential secretary for public affairs for President Park Geun-hye, told reporters, “I heard nothing has been confirmed about her death,” citing Kim Jang-soo, the national security chief.

“Starting in early 2013, her health has been increasingly getting worse, and she is now in critical condition, reportedly in coma,” a South Korean government official said. “But she has not died.”

Rumors have spread that Kim was suffering from drug addiction and living separately from her husband. Starting in 2000, she reportedly suffered from depression and alcoholism.