Top envoys unite against North, but not Japan

Top envoys unite against North, but not Japan 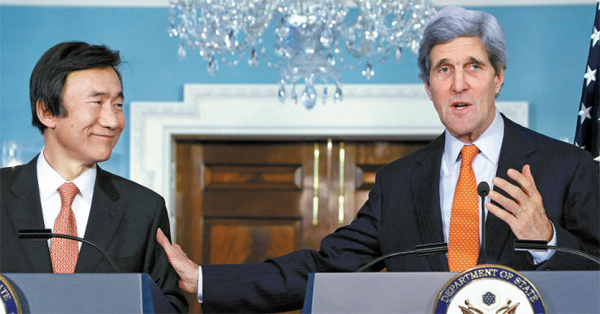 Foreign Minister Yun Byung-se and U.S. Secretary of State John Kerry held their first talks of the new year in Washington on Tuesday and showed a united front on North Korea, agreeing to deal staunchly with any provocations or attacks by Pyongyang and to intensify their consultations.

However, Kerry did not make a comment on Japan-Korea friction during a joint press conference with Yun, although Yun brought the subject up.

Yun said in a press briefing following his one-hour talk with Kerry that he “pointed out that historical issues stand in the way of reconciliation and cooperation in this region” and “emphasized the need for sincere actions,” without mentioning Japan by name.

Prior to the meeting, Yun said that he planned to raise concerns in regard to the increasingly nationalistic behavior of Japan, which seems to deny its violent role in the past, highlighted by Prime Minister Shinzo Abe’s Dec. 26 visit to the controversial Yasukuni Shrine. As the shrine pays tribute to Class-A World War II war criminals, Abe’s visit was criticized by not only victims of colonization such as Seoul and Beijing, but the international community as well.

Kerry did not address the issue publicly despite anticipation that he may.

A high-ranking diplomatic source said that while Kerry did not mention Japan, “most officials understand our government’s position.” He said, “There is talk that there needs to be reform in Korea-Japan relations.”

But the United States has emphasized its close defense alliance with Japan and is not expected to jeopardize that relationship, the source said.

In his statement, Kerry said that “not a sliver of daylight” stood between the two countries “on the subject of opposition to North Korea’s destabilizing nuclear and ballistic missile programs and proliferation activities.”

He added that the two sides agreed to “enhance policy coordination to tackle North Korean issues” and “intensify our consultations to assess the North Korean situation and explore our policy options,” a process that requires close engagement of China and other related parties.

The diplomatic source said that Korea and the United States will set up a high-level channel to discuss and analyze the situation in North Korea.

“Following the execution of Jang Song-thaek and recent sudden changes in the situation in North Korea, consultative meetings will be established between South Korea and the U.S. to discuss the situation in the North,” said the source. While it will start out as a platform for discussion between the U.S. and Korea, it is expected to expand to include Japan, China and Russia, other members of the long-stalled six-party talks. But it will exclude North Korea.

Yun concluded a three-day trip to Washington from Sunday, where he also met with Defense Secretary Chuck Hagel on Monday and other high-ranking U.S. officials and other Northeast Asia affairs experts.

Yun and Kerry also discussed other pending bilateral and regional issues such as the renewal of the bilateral civil nuclear agreement and the need to expedite Korea’s participation in the Trans-Pacific Partnership, a free trade agreement among 12 countries, including the United States, Japan, Canada and Mexico. The U.S. and Korea’s trade relationship has grown to $130 billion a year following the countries’ free trade agreement, which celebrates its two-year anniversary soon.

Kerry pointed out that Yun was the first top envoy to be invited to Washington in 2014, and it was the first meeting after a series of celebrations last year commemorating the 60-year alliance between Korea and the U.S.

Kerry said Washington remains “fully committed to the defense” of Korea. Meanwhile, the Pentagon confirmed in a statement yesterday the rotational deployment of a mechanized infantry battalion, the U.S. First Battalion of the 12th Cavalry Regiment from the First Cavalry Division at Fort Hood, Texas, to camps Hovey and Stanley in Korea on Feb. 1.

It said the 800-soldier battalion, equipped with Abrams battle tanks and armored infantry fighting vehicles, are to be part of Washington’s “rebalancing efforts” in the Asia-Pacific region.