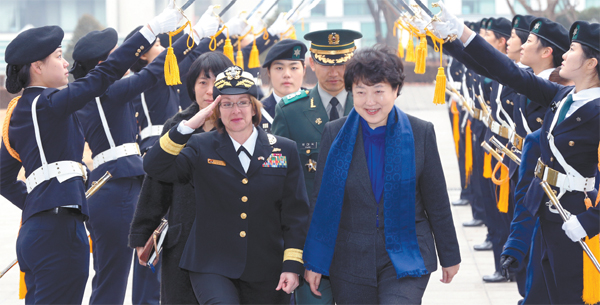 As the first female commander for U.S. Naval Forces Korea, Lisa Franchetti can appear stern in uniform. But in a speech at Sookmyung Women’s University yesterday, she related her daily struggle as a working mom under the theme “Leadership and Life Balance.”

Asked how she manages to juggle her job and domestic responsibilities, the commander said she always tries to remind her family how precious they are for her.

She explained her commitment to different responsibilities by drawing circles. She drew three circles with the following labels: family and friends; career and education; and health. Franchetti stressed that she tries to keep a balance among those three categories.

Sookmyung said it invited Franchetti to speak because female students are often conflicted over whether they can keep working after marriage.

“We hoped that the commander will share her vision and some tips about how she manages her work-life balance,” said an official of the university, who requested anonymity.

In the audience was Um Seon-hee, a senior studying public administration who is also an ROTC cadet.

“The atmosphere was really active and the Q&A session was really helpful,” said Um.

Franchetti arrived in Korea in August with her civilian husband and 7-year-old daughter and took command on Sept. 10.

She had visited Korea twice before, but this is her first time serving here.