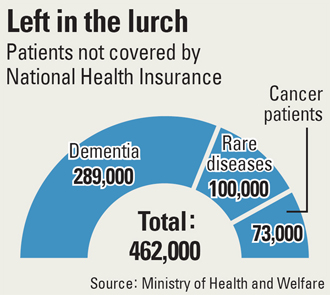 The tragedy in the family of Leeteuk, a member of idol band Super Junior whose father allegedly killed his own aged and infirm parents before taking his own life, has cast light on the country’s weak support system for people with dementia, in particular the limited number of nursing homes for dementia victims and the hurdles families must overcome to get state-funded nursing care.

Korea’s Confucian-based culture that emphasizes the responsibility of children to take care of elderly parents at home - even when it’s beyond their ability - aggravates the problem.

Han Jung-hee, 55, is involved in that struggle. Han’s husband has suffered from dementia for 10 years. During the first years of his illness, she could not get nursing help because her husband appeared normal when National Health Insurance Service examiners visited their house. His symptoms, including cognitive impairment and memory loss, flared sporadically, usually at night. It was only three years ago that her husband was recognized as having a score of three on the Clinical Dementia Rating.

The National Health Insurance Service, which determines the grade, entitles patients graded one to three on the dementia rating to insurance benefits. Patients placed in the first degree are so ill they spend most of the day in bed, while those in the second degree are capable of using a wheelchair. The third degree refers to people who need assistance from time to time to carry out normal daily activities.

After 10 years of looking after her husband, who does not recognize her anymore and whose condition is deteriorating, Han has developed depression and has started taking anti-depression medication.

According to the Ministry of Health and Welfare, the number of dementia patients aged 65 and above reached 576,176 last year, up from 474,066 in 2010. The ministry said the number would climb if it included patients kept out of the health system by their families. With those included, the number could go well beyond 600,000 and reach 1.27 million by 2030.

Of the 476,000, however, only 187,000 dementia patients are beneficiaries of state-run, long-term care, which provides financial subsidies to patients who are graded as suffering from a considerable degree of dementia. The rest, about 289,000, are cared for by family members or are treated at nursing homes, the costs of which are fully paid by families.

Critics say the standards of the insurance provider to determine the grading of the illness are too strict.

“The current grading system does not include seniors if they are physically healthy, even if have cognitive impairment due to dementia, leaving them totally in the hands of family members,” said Um Ki-wook, professor of social welfare at Kunsan National University.

Analysts call for more help from the country’s health insurance system for people in the early stages of dementia. Although the disease is incurable, patients’ progression can be delayed with treatment and rehabilitation.

“The government fails to provide care for those developing early dementia, who need recognition and rehabilitation training,” said Kim Hoo-nam, director at the Senior Welfare Center in Dalseo District, Daegu.

A lack of nursing homes is another big problem. There are about 15,000 care centers in the country, far short of the number needed to accommodate 576,000 dementia patients.

Meanwhile, the Seoul Family Court said yesterday it ruled in a divorce dispute that involved a wife caring for a mother-in-law with dementia.

The court ruled the 51-year-old husband should give 30 percent of his wealth to compensate his 41-year-old wife for having taken care of her mother-in-law for eight years. The husband claimed he inherited his fortune from his parents on the condition he would take care of them. He argued his wife was not entitled to the money because she started the divorce suit.