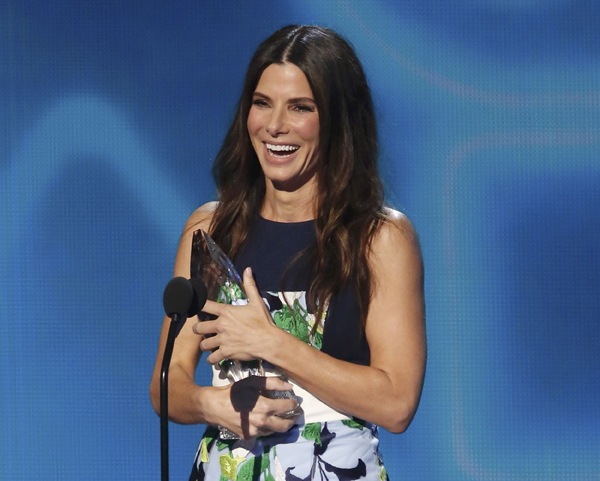 Sandra Bullock accepts the award for favorite movie actress at the 2014 People’s Choice Awards in Los Angeles on Wednesday. [REUTERS/NEWS1]

Fans deemed Ellen DeGeneres their favorite daytime TV host, making her the woman who has gained the most People’s Choice Awards with a total of 14 trophies.

“As a young girl growing up in New Orleans, if anyone would have told me I was going to win 14 People’s Choice Awards, I .?.?. I mean 12, yes. 13, maybe. But 14?” joked DeGeneres, host of “The Ellen DeGeneres Show,” who said that she wanted to make the show for everyone from old, young, black, white, gay and straight.

Justin Timberlake also nabbed three awards. Among them was the favorite album accolade for “The 20/20 Experience.” In a sweet moment, he thanked his “beautiful wife,” Jessica Biel, “for teaching me patience and the little things like just putting the dishes in the dishwasher. It goes a long way. Fellas, you’re welcome.”

Katy Perry, who was not at the show, scored the win for favorite video for the third year in a row, following up last year’s award for “Part of Me” and 2012’s honor for “Last Friday Night” with her hit “Roar” this year.

A pregnant Drew Barrymore, who joked that DeGeneres had called her fat backstage, presented her “Blended” co-star Adam Sandler with the comedic movie actor award.

Ian Somerhalder and Nina Dobrev, the stars of “The Vampire Diaries,” earned the award for best on-screen chemistry at the People’s Choice Awards. The duo, who had their round of break-ups and make-ups on-screen and off, joked about their coupledom.

“The good thing is chemistry,” said Dobrev, with her arm around Somerhalder, who she is no long romantically attached to. They managed to make a would-be awkward moment entertaining by addressing their buzz-worthy pairing head-on.

Shemar Moore heavily hit on fellow presenter Malin Akerman, cracking jokes about ebony and ivory and saying he didn’t see a ring on her finger. She played right along, leaning in as the crowd cheered them on.

Stephen Colbert won the favorite late night talk show host award, Britney Spears picked up the favorite pop artist honor, and Kaley Cuoco received the favorite comedic TV actress prize as well as the favorite TV comedy award, along with the rest of the cast of “The Big Bang Theory.”

Accompanied on stage by her sister Julia, Hudson, holding back tears, accepted the favorite humanitarian award. “My mother always taught us without family you have nothing,” Hudson said. “Whether you know it or not, we all are family. What happens to the other happens to us. It’s one thing to be a celebrity and have power, but it means nothing if we’re not making a difference and helping someone else. It feels good to see positivity acknowledged. Where we come from all you hear about is who shot who and who went to jail. There is more to life than the block you live on. We want to show them that I came from the same area and if I can do it, you can do it too.” AP