A plan needs its people

A plan needs its people 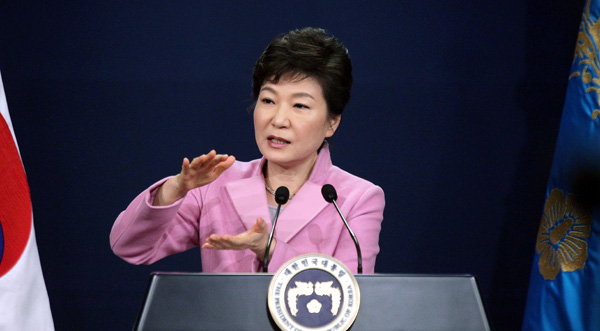 President Park Geun-hye explains her economic initiatives for the remainder of her presidency during a press conference at the Blue House this week. [Joint Press Corps]

When the Lee Myung-bak administration proposed the 747 plan, Koreans cheered. They thought the economy was sluggish because of the leftist president, and once the administration changed and a business-minded rightist president was elected, everything would go well. I believe the excessive desire of citizens led to the 747 plan.

In retrospect, it was seriously too rosy to attain 7 percent annual growth, a per-capita national income of $40,000 in 10 years and become one of the top seven economies in the world. But when the plan was conceived, few questioned it. Like the fate of an actress whose only talent is good looks, the plan was in the spotlight for a while, but it faded fast. The 747 plan was treated as a hollow vision that added to the national debt and promoted by a president who was out of his mind.

The 747 vision was not the only plan to be abandoned. Roh Moo-hyun’s “Vision 2030” has been virtually forgotten. Now, no one except his avid fans remember the vision to attain per-capita income of $49,000 and be in the world’s top 10 in terms of quality of living by 2030. Roh drew a grand blueprint for a welfare state with a balance between growth and distribution in 2006, and it was a well-made plan.

But the plan was attacked for lacking ways to raise the 1.1 quadrillion won ($1 trillion) needed for it. “The government designed a paradise without proposing ways to get there.” “Why would a president with a five-year term worry about 30 years later?” “Are the leftists attempting to have power permanently?” Skeptics and critics doubted the intent of the plan, and the president gave up on it. As the Korea-U.S. FTA became the center of nationwide debate, the 2030 vision was forgotten. Since then, officials and administrations have refrained from making long-term plans. Lately, supporters of Roh shed new light on his master plan for a great welfare state, but regrettably, policy becomes useless when the timing isn’t right, unlike an artifact that adds value as time goes by.

What about the 474 plan? We all wish for a great outcome, but already it is not promising. It sounds very much like the 747 vision of the previous administration and the five-year economic development plan. Critics argue that President Park Geun-hye is going back to the Lee and Park Chung Hee administrations and bringing back an outdated economy, while abandoning welfare and economic democratization. The plan gets more negative than positive reviews. In short, it is nearly impossible to attain per-capita income of $40,000 and not easy to reach 70 percent employment and 4 percent growth. Criticism focuses mostly on the slim chance of reaching the goals, but that is not very important.

The vision is a set of numbers that contain our will. They are only possible to attain when we make 120 percent more effort. The vision cannot be achieved if we continue at our usual pace. It would be just an estimate, a number without meaning. Let’s say the 474 vision was adjusted to 2.5/6.5/3.5. Would the critics approve? They would say the goals are so realistic that they can be attained at any time. It is easy to find 100 reasons why a vision is not feasible. The challenge is finding a way that works. So a country with no vision is more pathetic than a country with some exaggerated goals.

Vision 2030 and the 747 plan failed because they lost their internal compass. The plans were attacked and criticized, rather than cheered and encouraged. There are already signs to discourage the 474 vision. But when you are so pessimistic about the 747 plan, Vision 2030 and the 474 vision, what do you have left? What works for the Korean economy and the citizens? Some might envy Abenomics, but it is very simple. There’s nothing special about releasing money and pursuing restructuring. But all of Japan is raving over the policy. It works because the citizens support the drive. An economy is not driven by a government or companies. It grows with the citizens who support and cheer for it.