Off the hook: the high cost of phone insurance

Off the hook: the high cost of phone insurance 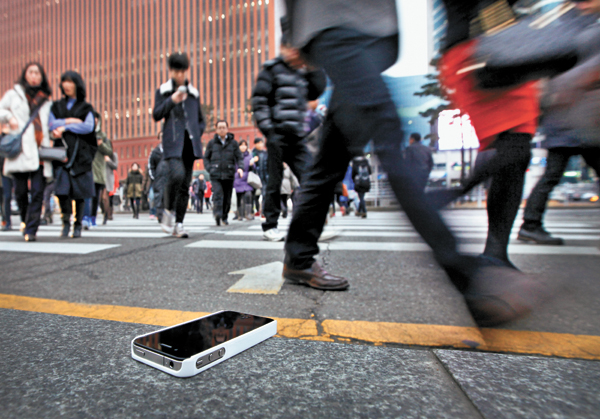 A smartphone abandoned on the street near a crosswalk in Yongsan District, central Seoul. By Park Sang-moon

I was enjoying a birthday party last month, just before Christmas, dancing around my friend’s small art studio in Nonhyeon, southern Seoul. With 80 people crowded into that small space, it was up to my little iPhone to keep the party going, blasting Christmas tunes through a stereo I had it hooked up to. It was a fun night, and anyone had access to the music, so they could play whatever songs they wanted to hear.

Unfortunately, too many people had access to the music. And when the party finally ended, just after 1 a.m., I was shocked to discover my iPhone was gone, too. I checked every crevice on the sofa, the bookshelves and under the tables, but eventually I had to admit that it was simply gone.

Like a lot of people, I’ve grown overly dependent on my phone, so suddenly being without access to my emails, schedule and other information was quite inconvenient. As I realized how little information on that phone I had backed up, I grew really annoyed. And, as I thought about all the personal information, passwords and memos on the phone, I became worried.

Those worries are why, when I bought that phone just over a year ago, I signed up for smartphone insurance, so I would be able to afford a new phone if needed. A few dollars a month was worth it for a peace of mind.

Unfortunately, when it came time to replace my phone, the process was anything but peaceful. 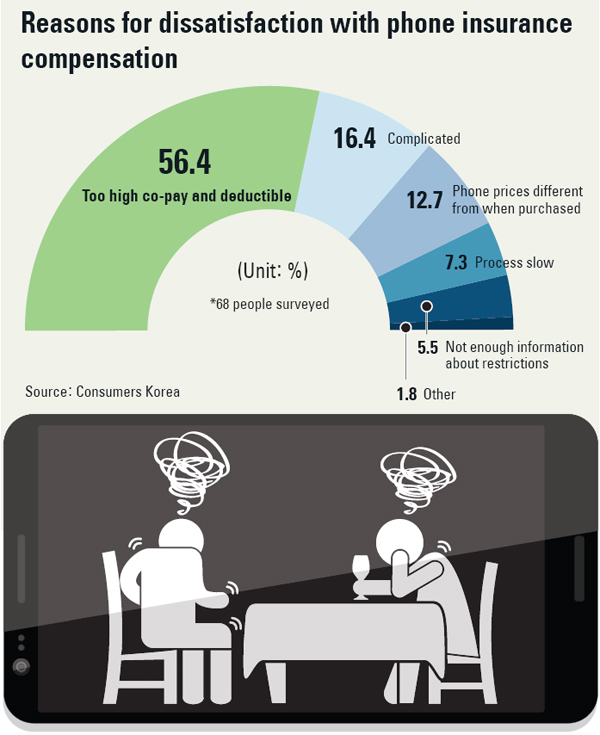 It turns out the maximum coverage my insurance offered was 600,000 won. Even though Apple has updated its phone lines, and KT has lowered the price of the 32GB iPhone 5 to 748,000 won, SK Telecom still charges the original price. That left me 346,000 won short of my phone’s replacement cost. On top of that, there was a 30 percent co-pay on the coverage, which worked out to about 180,000 won.

At first I felt furious, like I had been tricked into signing up for insurance that wasn’t worth it.

As I struggled with my frustration, a salesperson at the store suggested I just buy a whole new phone with a new two-year contract. Given the discounts for new phones, it would not cost me much more. Besides, I could save money by skipping on the insurance this time.

While that struck me like a waste, the truth is Koreans are famous for their high phone turnover - averaging a new smartphone every 16 months, according to a 2012 study by the American research company Strategy Analytics. Some say that’s the fastest turnover rate in the world.

I’m hardly the first person to go through the turmoil of a lost smartphone. The three local mobile carriers - SK Telecom, KT and LG U+ - received 940,000 reports of lost smartphones in 2012. The National Police Agency said reports of stolen smartphones jumped to 31,075 in 2012, more than five times the number reported in 2009.

Consumers Korea, a well-known consumers’ rights group, confirmed that I wasn’t the only one shocked by how much it costs to replace a lost phone, even with insurance coverage. It said around 10 million people have signed up for smartphone insurance and many have expressed their dissatisfaction.

Last week, the group said in a report that the average insurance claimant needs to pay 49 percent of the cost of a new phone after making insurance payments of about 4,000 won per month for 10 months.

Unsurprisingly, people who did not know the details of their insurance were not very happy with the results, with 59.7 percent of those who applied for compensation saying they were unhappy with the service they got. Half said their unhappiness came from the amount they had to pay for their replacement phone.

“Although the prices of mobile devices have gone up to more than 1 million won, the amount of coverage is not enough for those prices,” said Consumers Korea, adding that the highest coverage local telecoms offer is 850,000 won.

With the arrival of smartphones in Korea in 2006, which often cost around 1 million won, telecommunication companies started to offer insurance, and almost 10 million mobile network subscribers have signed up.

“Customers feel comfortable signing up for insurance when they buy a smartphone because the paperwork is readily available at mobile network stores,” said a KT manager surnamed Lee, who was not authorized to speak to the media for the company.

However, it is important to note that insurance companies calculate their coverage based on the factory price of the devices, rather than the retail price. So even if phones are sold below the factory rate at the store, that does not affect the insurance payout.

Sometimes, it’s even cheaper to abandon insurance coverage and to just buy the same phone directly from a store, as the factory price of a device can be higher than the maximum coverage from the insurance company.

Manufacturers tend to keep their factory prices unchanged as they have little reason to lower it.

“As network carriers are going to provide deep discounts to encourage sales, [lowering the factory price] would be seen as dropping phone prices,” said Jung, a salesman with LG U+.

He added that network carriers are focused on adding new customers these days, so they will do anything, like offering cheaper or free outdated smartphones to increase subscribers.

“Therefore, manufacturers don’t need to change their factory prices and this will keep the replacement price high for insurance compensation,” said Jung.

Many consumers who have lost phones refrain from getting insurance again, as they have learned that insurance does little to protect them. They claim that it is cheaper just to buy phones from friends who own outdated or less-than-perfect phones.

“Unless the screen is broken, most smartphones can be fixed at a local repair shop not associated with a phone manufacturer for around 50,000 to 70,000 won,” said 26-year-old student Kim Min-jung, who has lost her phone before.

Even if she were to buy a new phone instead of getting one through insurance coverage, the price can still be cheaper because of discounts offered by mobile providers for new contracts.

“Whether you get the insurance or not, you’ll have to pay a great deal for a new phone,” said Kim. “So I don’t do insurance and try to find a new phone when I’m actually in the situation to look for one.”

“As we have seen many people feeling burdened by the amount they had to pay for a new phone, it is hard for us to strongly recommend insurance to customers,” said an employee at a mobile phone store in Daechi, southern Seoul. “It is up to consumers whether to get insurance.”

Although he does not recommend it, Jung at LG U+ said that it can be a better value to sign up for insurance at least for a year and then cancel it.

“Although smartphone insurance may be nominal, it is worth it if you lose your phone in the first year of your contract,” he said.

After that, he said, it’s probably a better deal to get a new phone because Korean consumers usually get discounts for new two-year contracts.

As more consumers complain about their frustrations with insurance and replacement costs, some mobile carriers are taking steps to improve the situation.

KT decided to introduce a new insurance plan that lowers the co-pay to 20 percent, hoping to lure away frequent phone-forgetters.

“It is one service we have set up for our customers’ convenience,” said Lee, the KT manager.

“Many customers have requested us to lower the rate, and we managed to come up with a plan after working with several insurance companies to lower the risk.”

But other network carriers say they have no immediate plans to alter their insurance plans.

SK Telecom said it is not currently reviewing its options while LG U+ said its current policy is just to have customers pay a flat 180,000 won for a replacement phone.

As mobile devices have become “smarter” day by day, people have put even more private information into their smartphones and tablet PCs. That makes their devices very convenient, but also poses huge security risks when they are lost.

In the past, apps could use a device’s global positioning system to track down a lost phone or tablet. However, savvy thieves usually now know how to disable or remove GPS chips, so these days, mobile operators are looking for ways to help consumers protect their personal data.

Thanks to a push by the Ministry of Science, ICT and Future Planning, local mobile device makers Pantech and LG Electronics have agreed to install the anti-theft technology known as a “kill switch” onto their devices (talks with other manufacturers are ongoing). The kill switch cannot be disabled or deleted, and once activated, it deletes all personal information and it turns a device into little more than a glass-and-plastic brick. Even changing SIM cards won’t bring back a killed device, making it worthless on the black market.

Authorities are hoping that making stolen devices unusable will go a long way toward eliminating theft.

“Many lost devices don’t make it back to their original owner, so the idea of at least protecting personal information became crucial,” said an official at SK Telecom.

The similar service became available on Pantech’s Vega Secret Note last fall. Local network carriers say they will work with the government to boost these and other sorts of security features for their smartphones.

Have you found your phone?

While being able to protect your information with a kill switch is good news, better would be the ability to find a missing phone.

Sadly, my iPhone never returned. What I learned through my experience, first of all, is that I shouldn’t expect any magical reunions with my vanished electronics.

Second of all, although the service may not yet be perfect, I need to sign up for the “Find My iPhone” service (or the equivalent services offered by other smartphone manufacturers, like Android’s Device Manager). These services help you track your devices remotely and figure out if something is stolen or just misplaced.

Thirdly, I need to keep my information backed up on the cloud, so I can delete it from devices when needed and replace it easily.

And with those three things in mind, I will now get ready to bleed the 520,000 won I need to get a new phone.