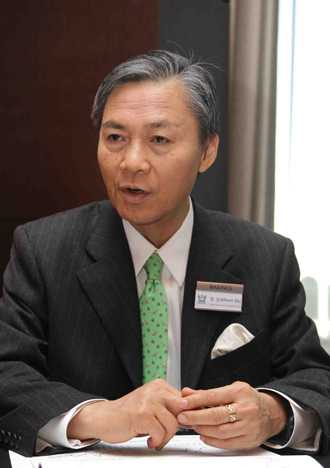 Although global investors view the Asia equity market as a glass “half empty,” Khiem T. Do, head of the Asian multi-asset division of Hong Kong-based Baring Asset Management, advises investors to put their money in “unloved markets” like Korea and China.

“Korea and China equity markets are cheap but have been unloved by global investors, and picking an unloved market tends to make money,” he said in an interview yesterday with the Korea JoongAng Daily in Seoul. “As far as concerns about the Korean market, investors are worried about the slowing Chinese economy, and there is a perception that the weakening yen makes Korean exports less competitive.”

“However, in practice, Korean exports are not collapsing. Samsung and LG Electronics have been doing extremely well, and Japanese electronics companies aren’t able to catch up with them now,” he said, before adding a caveat. “If the yen continues to weaken from 105 against the U.S. dollar to 120 and if we assume the Korean won stays at this level, that means Japanese exports will be something like close to 15 percent cheaper than Korean exports. That will hurt Korean exports, especially the car industry.

In his analysis of asset allocation over the past seven years, Do said there are some chances to profit in the Korean market and other Asian markets this year.

Since 2007, Asian equities have been good in alternating years, his data showed. “They were bad last year, so this year may be better if you believe this chart.

“Asia will be a good market for investors with a long-term perspective. If Korea and China implement the right reforms and policies, and robust global growth is delivered, they could be new leaders in 2014,” Do said.

“Most global investors remain underweight, especially in China and even in Korea,” he said.

“When you have the G-4 economies - the United States, Europe, Japan, China - recovering, that is quite good news for Korea and the rest of Asia, and yet at the moment, investors don’t seem to be interested. They are chasing the United States and Europe, because I think it is comfortable to be in the old favorites.”

Investors are not comfortable with China now because of tight liquidity conditions as the Chinese government moves to control the shadow banking system, he explained.