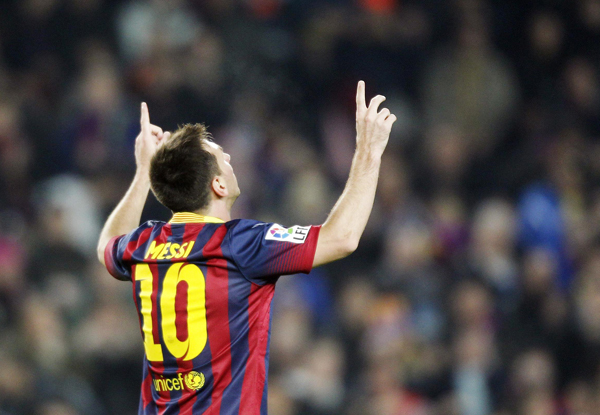 Lionel Messi came off the bench and scored twice on his return from injury and Cesc Fabregas also netted a double as Barcelona strolled to a 4-0 win over Getafe at home in their King’s Cup last 16, first leg on Wednesday.

Messi was given a rousing ovation by the home fans when he replaced Andres Iniesta in the 64th minute at the Nou Camp, the World Player of the Year’s first appearance since straining a thigh muscle in November.

Dominant Barca, which rested a number of regulars, was already two goals ahead by the time the Argentine forward entered the fray after Fabregas headed them in front in the eighth minute and added a penalty in the 63rd.

Messi looked fit and sharp during his half-hour on the pitch and his successful return to action is good news for Barca coach Gerardo Martino, with Saturday’s La Liga clash at title rivals Atletico Madrid looming.

Messi’s first goal came in the 89th minute when he collected a loose ball in the penalty area and slotted into the corner from close range.

His second in added time was a trademark dash in from the right wing and he left the Getafe defenders floundering before lifting the ball high into the net and bringing the adoring home faithful to their feet.

There was a festive atmosphere despite the giant stadium being less than half full and former Barca coach Tito Vilanova, who is battling the cancer that forced him to step down at the end of last season, was watching from the stands.

If they successfully negotiate next week’s second leg in Madrid, Barca will meet Rayo Vallecano or Levante, who play their first leg on Thursday, in the quarterfinals.

“He has been training very well and as you could see, those are the kind of goals the best players can produce,” Puyol added.

“There is a very long way to go in the league but it’s a very important game [on Saturday] against what I think is one of the best teams in the world. Let’s see what we can do and the important thing now is to recover well from tonight’s efforts.”

Messi scored one of the best goals of his career against Getafe in a Cup game in April 2007 and although Wednesday’s second effort was not in the same league, the pace, skill and lethal finish were typically brilliant.

As well as scoring twice, he fizzed a free kick just wide and almost set up Pedro with a clever floated cross.

It was fitting way for the Barca fans to celebrate the 20th anniversary of one of the greatest nights in the club’s history, a 5-0 La Liga win against bitter rivals Real Madrid on Jan. 8, 1994, when Brazil forward Romario netted a hat-trick.

In Wednesday’s other first legs, second-division Alcorcon surprised top-flight Espanyol with a 1-0 home win, while Real Betis won by the same score against visiting Athletic Bilbao.

Third-tier Racing Santander came from a goal down to draw, 1-1, at home to Almeria.