Mattingly will manage LA Dodgers through ’16

Mattingly will manage LA Dodgers through ’16 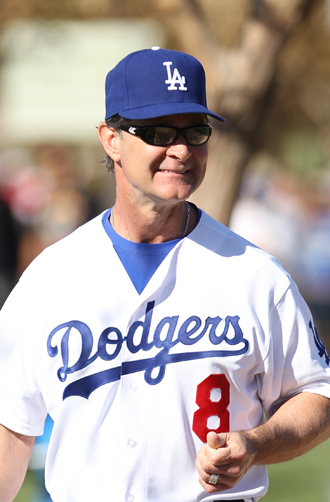 Don Mattingly will be back as manager of the Los Angeles Dodgers next season with a new three-year contract that takes him through 2016, quieting speculation that his future with the club was somehow in doubt.

A person familiar with the agreement, speaking on condition of anonymity because no statements were authorized, said Mattingly is getting a raise from the $1.4 million he made last year. By comparison, Yankees manager Joe Girardi, entering his seventh season in New York, is starting a $16 million, four-year agreement after completing a $9 million, three-year deal.

Mattingly had sought the stability of a multiyear deal.

“I just want guys to know that the organization having confidence in you is important to me as a manager,” he said by phone from his offseason home in Evansville, Indiana.

Mattingly has a 260-225 record in his first three seasons with the Dodgers, who reached the NL championship series this year, automatically triggering an extension of his contract that was set to expire at the end of last season.

He was runner-up for NL Manager of the Year last season.

Last winter, the Dodgers declined to exercise Mattingly’s option for 2014, a move he believed portrayed him as a lame duck in the clubhouse.

In an awkward October news conference after the Dodgers were eliminated by St. Louis in the playoffs, Mattingly said the organization put him in a difficult position by not exercising the option. The front office didn’t clarify his status for 2014 that day, which frustrated Mattingly.

“I knew my contract had vested. I thought that at least that would have been said that day,” he said. “It kind of got left open and that’s what got me going a little bit. If I had to do all over again, I would have preferred it to be in-house. I wish I had kept it inside and dealt with it face-to-face with those guys.”

The next day, the team didn’t pick up the contract option of coach Trey Hillman, who was Mattingly’s right-hand man on the bench.

Shortly thereafter, Mattingly spoke with majority owner Mark Walter and team president Stan Kasten, who let him know they wanted him back.

“I was comfortable with where it was going to go,” Mattingly said. “I knew at that point we’d get something done.”