Jeong-seok (Jeong Jae-young) has obsessive compulsive disorder, which forces him to plan every aspect of his life.

He wakes up, crosses the road, visits the convenience store and goes to bed at the same time every day.

He has had a crush on Ji-won (Cha Ye-ryun) for some time. When at last he confesses his love for her, she turns him down, saying she doesn’t want to be with someone who is always punctual.

Heartbroken, Jeong-seok decides to change himself with the help of So-jeong (Han Ji-min), a close friend of Ji-won and Jeong-seok’s colleague.

Unlike Jeong-seok, So-jeong is always late. She is a free spirit through and through.

At first, Jeong-seok is disgusted by her behavior, but it isn’t long before the “opposites attract” theory kicks in.

Han has never had a role like this. In this film, she is wild and carefree, the opposite of the pretty, frail women she usually plays. It’s a good chance for viewers see her portray such a different character.

Like many other Korean rom-coms, the second half of the film is more vague and viewers may find themselves a bit lost because of the rapid plot changes. 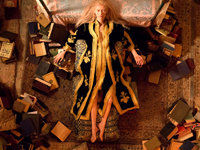 Vampires Adam (Tom Hiddleston) and Eve (Tilda Swinton) have lived about 500 years and 3,000 years, respectively. Adam, who lives in Detroit, carries a wooden bullet and is quite the pessimist. Meanwhile, Eve is a bit of a romantic and even flies from Morocco to the United States to be with her lover.

But even with Eve’s optimism and a history of a relationship built on trust and respect, the pair are in for some rough times when Eve’s sister comes knocking.

Ava is wild and reckless, the polar opposite of her sibling.

“Interview with the Vampire,” in 1994, which starred Tom Cruise and Brad Pitt, is said to be one of the best classic vampire films.
But “Only Lovers Left Alive,” under the direction of Jim Jarmusch, seeks to make a name for itself as a classic vampire romance. The film was highly received at Cannes for its vintage and retro feel.

With their porcelain-like skin and sharp features, Hiddleston and Swinton look very much the part of vampires. In particular, Swinton’s queen-like demeanor goes very well with Eve, the vampire who has lived and experienced centuries of humanity.

Don Jon (Joseph Gordon-Levitt), a New Jersey bartender and regular clubgoer, has a pornography addiction. Although he gets his pick of the ladies each night, he is never satisfied. Then one day, he meets Barbara Sugarman (Scarlett Johansson) in a club and finds her fascinating.

The film is Joseph’s writer-directorial debut and it’s mostly based on his sense of humor. For the most part, his humor seems to have struck a chord with critics and audiences alike. The film is never serious but not too shallow, either. By contrasting two extremes, the film tries to convey the important things in life.

One of the favorite animations of all time for kids is back on the screen with a sense of modernization. Tarzan (Kellan Lutz) is now the son of the deceased CEO of Greystoke Energies. He lost his parents in a helicopter accident and was brought up by gorillas. After his father’s death, the company was taken over by a man who is eagerly looking for renewable energy source that happens to be under the jungle where Tarzan lives.

Its interesting and modern plot twist makes the film close to a children’s version of “Avatar.” But the big problem with “Tarzan” is that the characters seem incomplete. Viewers might find awkward facial features and textures, even in 3-D. So it’s highly doubtful that the film will successfully follow its 1999 version. Some even say the movie is unlikely to make it into theaters in the United States.

With only a high school certificate, Song Woo-suk (Song Kang-ho) manages to pass the bar exam. But because of his limited education, he is an outcast and a joke to the rest of the attorneys. He accepts tax cases his colleagues regard as lowly cases and becomes affluent.

One day, he accidentally comes across a case in which Jin-woo (Im Si-wan), the son of Woo-suk’s acquaintance, is tortured. The case enlightens him and he becomes a human rights lawyer.

The film drew the public’s attention even before its release because its synopsis is based on the true story of the late President Roh Moo-hyun, which caused arguments among some viewers.

Song pleaded with viewers to focus on the film itself.

However, even if no explanation was included, the film can still be viewed as a touching story of an attorney who faced a life-changing experience. It is also a treat for fans of Song as he shines in the genre that he is best known for.

The Secret Life of Walter Mitty (12)

Based on the famous short story of the same name, Walter Mitty (Ben Stiller) is a modern office drone who dreams of great things. He works in the “negative asset department” at Life magazine. He has a crush on his co-worker, Cheryl Melhoff (Kristin Wiig), but is too shy to even try to talk to her in person.

But when Walter daydreams, he daydreams big, zoning out completely from real life, much to the delight of his bullying co-workers.

For the last edition of Life magazine, the publisher decides to use a photo submitted by the famed photographer Sean O’Connell (Sean Penn) as the cover image. But Walter cannot find negative No. 25 among the other negatives sent by O’Connell and sets out to track it down by finding O’Connell.

The mission takes him to Greenland, Iceland and the Himalayas.

The message of this movie, about the necessity of pushing your way past obstacles and overcoming as you go through your life, is still very relevant today.

Wen Jiajia (Tang Wei), the mistress of a wealthy Beijing tycoon, arrives in Seattle from China, armed with her boyfriend’s unlimited credit card and pregnant with his son. She couldn’t get permission to give birth in China, but she is determined to give birth to her baby in the United States.

In Seattle, she meets Frank (Wu Xiubo), a driver and tour guide, and he takes her to the maternity center and helps her get settled in. He is a gentleman, and everything that Wen’s boyfriend is not. As she considers her baby’s future, Wen is swayed by both men and must decide who she really needs.