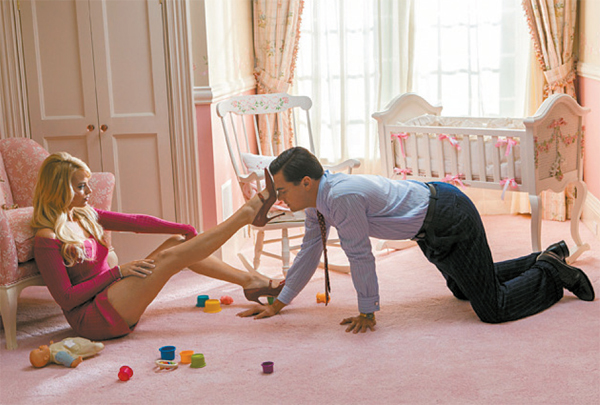 Australian actress Margot Robbie manages to hold her own alongside Leonardo DiCaprio in “The Wolf of Wall Street.” Provided by 21st Century Fox

Even with the plethora of grandiose characters on his resume, Leonardo DiCaprio was in for a challenge with the role of Jordan Belfort, the man at the center of “The Wolf of Wall Street.”

Just how do you depict the glamour, glitz and fun of a self-made man from the suburbs who scammed his way into $49 million by the age of 26, while also condemning the criminal behavior that led to a 22-month prison sentence for fraud and money laundering?

Luckily, DiCaprio had some time to get his head around the project that marks his fifth collaboration with the great director Martin Scorsese - six years of it to be exact. The actor bought the rights to the story back in 2007 but was unable to get filming started until 2012.

But just what would DiCaprio know about a self-made scammer like Belfort? In some ways they seem similar, with the big money, outrageousness and excess. But in other ways, they are quite different, with Belfort being raised in New York by middle-class parents, while DiCaprio was a child actor.

The key to Belfort is realizing that underneath the private helicopter, the armadillo of luxury cars, a 167-foot yacht once owned by Coco Chanel and the $700,000 hotel bill, Belfort was basically an average Joe, raised by accountant parents of Jewish heritage. This is why Belfort’s tale, for all its greed and hedonism, is relatable - he was a man out to achieve the American dream.

There is never a dull moment from the start. Even office scenes depicting business deals play out like a day at Disneyland - granted, it is an office that comes with strippers, hookers, dwarf tossing and lots and lots of cocaine.

While DiCaprio’s name instantly lends credibility to the scenes where Belfort is partying, whether aboard yachts, trashing hotel rooms or cruising around Europe, it is in Belfort’s brokenness, drool and all, that DiCaprio really shines.

And who knew DiCaprio could be so witty?

As he dances, convulses under the influence, foams at the mouth and rolls down a flight of stairs at a country club and then proceeds to drive his Ferrari back home in a state Belfort calls the “muscular dystrophy” phase of a high, you’ll wonder whether DiCaprio will be able to find such an all-encompassing role ever again.

And while some may consider it ill luck to be sharing the spotlight with DiCaprio, the supporting actors of “Wall Street” all can hold their own. Their eccentricity and ways of coping with excess make for fascinating viewing for us mere mortals who have wondered how those in the fast lane keep it together - or, in this case, don’t.

The husky-voiced airhead model-turned-trophy wife played by Australian actress Margot Robbie captivates not just Belfort, but the audience, too, as she makes the transition from beautiful temptress to trophy wife with a temper.

Then there’s Jonah Hill, who plays Belfort’s associate and best friend, but who comes with so much baggage that him marrying his cousin is the least of his worries.

Last but not least, Matthew McConaughey, who appears just in the first 15 minutes of the film as Mark Hanna, the deranged mentor who sets DiCaprio’s character out on a path of gross immorality, sets the groundwork for all that follows and the havoc wreaked on the way to the top.

The chest-thumping and warrior-singing by McConaughey is no doubt some of his finest moments.

When Belfort’s life gets too outrageous to buy into and his highs become too dramatic to evoke, it is through these supporting characters that you understand why Belfort’s life, as seductive as it may have been, was a never-ending ride through hell.

Through interviews, DiCaprio has described the film as representing “everything that’s wrong in America today.”

But many critics claim that the movie really glorifies life in the fast lane.

And how could it not? By the end of the ride, you’ll not know what hit you as you sit there trying to process all the things that you’ve seen over the last three hours.

But the bigger question that looms is - how on earth will DiCaprio be able to outdo himself after such an iconic role?