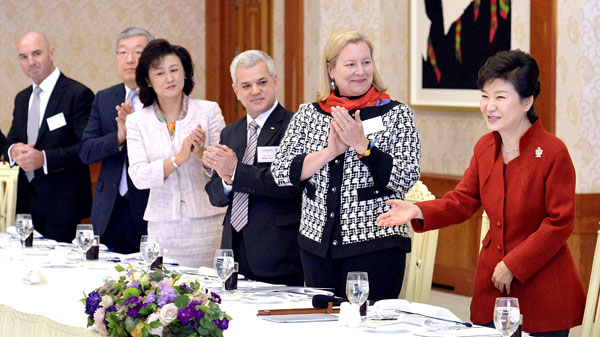 The government will offer an enhanced package of incentives for foreign investors setting up global headquarters or research and development centers in Korea, President Park Geun-hye promised at a luncheon yesterday with executives of foreign corporations based here and chambers of commerce representing different countries.

The incentives, part of a flurry of measures the government has prepared to attract more foreign investors, is meant to upgrade the quality of investments in Korea, going beyond the simple attraction of foreign capital.

“I would like to recommend Korea as the most promising investment destination,” said Park in a welcome address at the luncheon. “The most important factor for a company to decide on an investment destination is the competitiveness of the local partner, excellent human resources, a supply base for parts and materials, the size of the market and growth potential, and the foreign investment-friendliness of the government that wants to resolve difficulties investors are having.”

The fact that Korea has free trade agreements with major economic blocs, including the United States and the European Union, is one of the benefits that Korea can offer, the president added.

Analysts point out that even though foreign investors account for one fifth of Korea’s export volume, the jobs they have created here make up a mere 6 percent of the total. Having foreign investors locate headquarters and R&D centers would bring in top-notch technologies and create better jobs, explained Cho Won-dong, senior presidential secretary for economic affairs, in a briefing.

Yesterday’s meeting with 21 foreign CEOs and four leaders of the chambers of commerce of the United States, the European Union, Germany and Japan comes nine months after Park had a similar one last April.

In response to the president’s message, Sergio Rocha, CEO of GM Korea, denied rumors that the company was pulling out of Korea.

“We are here to stay,” Rocha said.

Park responded: “My government is here to support you.”

Despite GM Korea’s repeated denials, there has been speculation since April that the U.S. automotive group will be gradually withdrawing from Korea, one of its main production hubs, after it bought failed local carmaker Daewoo Motors in 2002. The reasons were mounting wages and overly militant unionists.

Hours before the luncheon, the Ministry of Trade, Industry and Energy unveiled measures to revitalize foreign investment, which included reducing income taxes for employees of foreign nationality working at foreign companies that have local branches or headquarters in Korea.

The Korean government will apply a uniform 17 percent income tax to all of those workers regardless of how high their salaries are.

The measures are in line with the foreign investment bill that passed at the National Assembly on Jan. 1 to help ease regulations on second-tier subsidiaries of Korean holding companies establishing joint ventures with foreign companies.