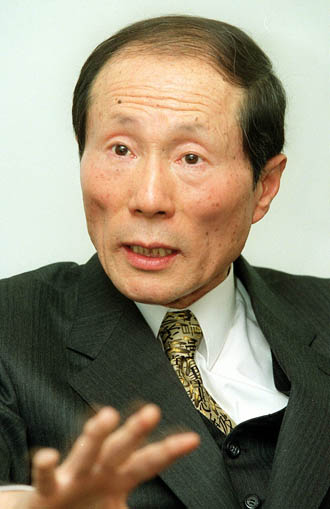 When entrepreneur Chung Moon-soul donated 30 billion won ($28.2 million) to the Korea Advanced Institute of Science and Technology in 2001 it surprised Koreans, many of whom entertained daydreams of being rich but never thought of giving money away.

But Chung was always an original. The son of a farmer, Chung started Mirae Corporation, which was listed on the U.S. Nasdaq.

A few months before the donation, Chung stepped down as CEO of the semiconductor equipment firm and handed the reins to a non-blood relation, a practice that was still rare in the Korean business community. People dubbed Chung Korea’s Bill Gates.

Yesterday, Kaist announced with fanfare that Chung would donate an additional 21.5 billion won to the prestigious engineering school, where he served as head of the board of directors. A donation ceremony will be held at the Ritz-Carlton in Seoul today.

Kaist said it will respect Chung’s wishes and plans to spend some of the donation on its Graduate School of Future Strategy, which Kaist hopes to foster into a prominent think tank like Harvard’s Kennedy School. The rest of the money will be dedicated to brain research, also in accordance with Chung’s wishes, Kaist said.

Chung, whose 2001 donation to the university was the biggest individual donation in Korea’s history, said he is happy to give away his fortune before his own demise.

“I decided on this donation to contribute to the future of Korea and to keep the promise to myself not to leave wealth to my family through the generations,” said the 75-year-old in a statement released by Kaist.

“I desire the donation to help Kaist blaze a trail through unchartered realms.”

Chung was born in Imsil, an agricultural area in North Jeolla, and did not leave the region until his mid 20s. He graduated from Wonkwang University in Iksan, North Jeolla, with an oriental philosophy major. His life prior to entering the business world, which he did in his late 40s, is not well known.

A report said that after completing his compulsory military service, Chung worked for the Korean Central Intelligence Agency for 18 years, until 1980, which helped the administration of strongman Park Chung Hee crack down on dissidents. Chung has rarely talked about that time.

He created Mirae Corporation in 1983 and listed the firm on the Nasdaq in 1999, making it the first Korean company to appear on the tech-heavy exchange. He also listed it on its Korean equivalent, the Kosdaq.

Chung, who never studied science at a higher educational institution, began his relationship with Kaist through a professor at the university whom he entrusted to develop a software program for Mirae.