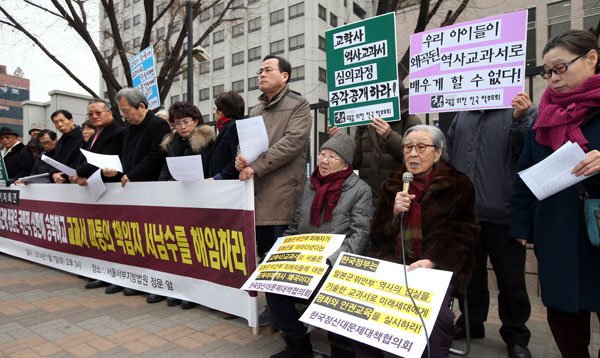 Surviving former “comfort women,” who were sexually enslaved by the Japanese army during World War II, and families of independence activists during Japan’s colonial rule, held a rally against Kyohak Publishing Company at the Seoul Western District Court on Tuesday, when the court had its first hearing on an injunction to ban its book. [NEWS1]

Cheongsong Girls’ High School has followed nearly 20 other schools in dropping its plan to use a history textbook by Kyohak Publishing Company, and it now appears that only one school in the country is going ahead with the controversial book.

Nearly 20 schools that initially elected to use the Kyohak textbook have bowed to the growing public pressure in recent days. Critics claim the textbook’s contents have a conservative slant that show definite biases toward Japan and the military government of former President Park Chung Hee.

However, the controversy surrounding the book looks far from over, as the ruling Saenuri Party has blamed opponents for politicizing an educational matter and turning the case into an ideological dispute.

Some have also voiced concerns that the issue has become a witch-hunt against the embattled publisher, arguing that Kyohak made all the revisions recommended by the Ministry of Education, with the final version of the book having yet to be released.

Over the past few months, squabbling over the textbook has turned into a fierce blame game between liberals and conservatives, with each side trying to push a political and historical agenda.

The dispute started in September when the Education Ministry announced its plan to revise eight history textbooks that had already passed the initial certification process. The textbooks, screened by the state-run National Institute of Korean History, had all received approval in August.

The ministry ordered the eight publishers to make a total of 829 revisions, 251 of which fell on Kyohak.

While seven publishers had their share of revision demands, Kyohak - known to have a conservative perspective on history - was put under the most scrutiny.

In the book, Kyohak says that the 1965 Treaty with Japan laid the foundation for the country’s rapid economic development by the military government of Park Chung Hee - a perspective embraced by conservatives. The treaty normalized diplomatic relations between Seoul and Tokyo in exchange for $300 million in compensation and $200 million in loans as a way to compensate for Japan’s 36-year rule over the peninsula.

One of the most contested excerpts in the Kyohak textbook comes from one of its captions for a photo depicting Korean women who were forcibly enslaved by the Japanese Imperial Army during World War II - euphemistically called “comfort women.”

“Unlike other local comfort women, there were many occasions in which Korean comfort women [in a third country] followed Japanese troops every time they moved to another battle line,” the caption reads, as if to imply that the women voluntarily followed those men.

Surviving comfort women visited the heads of these schools, lamenting their decision to use the Kyohak textbook. Their pleas were forceful enough for officials to drop their initial plans, and came at a time when national sentiment has run high amid historical disputes with Japan.

“We need to teach our students rightful history without distorting it so they can move the country forward,” Lee Yong-su, 85, a victim, said during her visit to Cheongsong Girls’ High School on Wednesday.

Under growing pressure both on the Internet and in the classroom, the school officials who claimed that they opted to use two history textbooks - one by Kyohak and another by a liberal-leaning publisher - to ensure a balanced perspective of history all reversed their initial decisions to use Kyohak.

As more schools dropped the Kyohak textbook, the Ministry of Education stepped into the matter, saying school boards were pressured by outside forces to drop Kyohak and that doing so breached the autonomy of the schools.

“Following a special investigation into 20 schools, we have concluded that they reversed their initial decisions [to use the Kyohak textbook] because of relentless criticism from civic groups to stave off potential confusion and discord in the classroom,” Vice Education Minister Na Seung-il said during a press briefing on Wednesday.

The announcement, however, has enforced the suspicion among opponents of Kyohak that the government is backing the publisher.

And the dispute has also now moved into the political arena, with the ruling Saenuri Party criticizing liberal groups for politicizing the education issue. The party also suggested reinstating the government-designated textbook system, in which the government takes full control of writing, certifying and distributing school textbooks.

“If the current textbook-approval system results in the kinds of social problems we have seen in recent days, then maybe we should have a serious discussion about reinstating government-designated textbooks like we did in the past,” Choi Kyung-hwan, the floor leader of the Saenuri Party, said on Tuesday.

But the ruling party’s proposal for reinstating government-designated books has been met with severe backlash from the opposition and scholars, who believe such a policy would draw the country back into a dictator-like era. During the 1970s, the government had full control over school textbooks.

“Only China and North Korea use state-designated textbooks. [The idea of using such books] is nonsense,” said Lim Jie-hyun, a professor of history at Hanyang University.

Lim added that the fundamental problem concerning history class lies in Korea’s obsession with education and test scores. “History is a subject that should be discussed among students and teachers, because there is no one definitive answer when interpreting past events. But in Korea, teachers demand that students give absolute answers for the sake of doing well on college entrance exams,” Lim said.

Lim added a textbook should only be used as a supplementary tool in the classroom to teach history.

But Kyohak had its own say regarding the recent turn of events.

“We made all the revisions in our textbook, including a [revision to the] caption about the comfort women, which is to be printed next week,” said an official from Kyohak, speaking on the condition of anonymity. “Once it is, those in the opposition will know [the truth].”