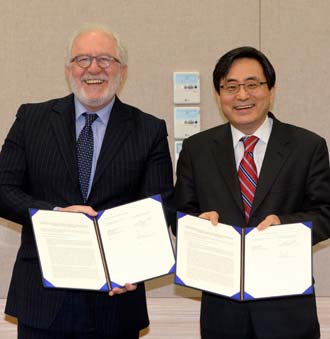 Mario Pezzini, left, the director of the OECD Development Center, and Shin Dong-ik, the deputy minister for multilateral and global affairs in the Ministry of Foreign Affairs, display an agreement detailing a joint research project on Korea’s Saemaeul Movement yesterday in Seoul. [NEWSIS]

The Organization for Economic Cooperation and Development (OECD) has planned its first comprehensive research project into the Saemaeul (New Community) Movement, Korea’s rural area development policy model launched in the early 1970s that helped the nation overcome poverty in the post-war era.

In a ceremony held yesterday, the OECD and the Korean Ministry of Foreign Affairs signed an agreement to conduct joint research on the Saemaeul Movement. The two entities also held a joint workshop the same afternoon.

Mario Pezzini, the director of the OECD Development Center, headquartered in Paris, flew in to Seoul to attend the seminar and sign the Korea-OECD Joint Research Project on Rural Development agreement at the ministry in central Seoul.

He said that the strengths of the Saemaeul Movement included its multi-sector policy and the cooperation and joint responsibility among actors on the local and central levels. Pezzini also praised the idea of providing incentives to municipalities.

“In many cases, rural development has been perceived as an agricultural sector. That was not the case in Korea,” Pezzini said.

He said the success of Saemaeul was further due to the “strong engagement of the central government but also the role of the local community.”

“In order to ensure the development of a community, we now know you need infrastructure, a series of quality services, and you need material public goods such as trust,” he said. “The capacity to create these collective goods depends largely on cooperation. On the other hand, if you only rely on cooperation, there is no incentive or competition, and that tends to evaporate after a while.”

Over 18 months, the in-depth joint study on the movement - the first of its kind with the OECD - is expected to assess the Saemaeul Movement as a rural development model and policy guide for developing countries.

Over four decades, the rural community and infrastructure development movement, which helped spur rapid growth in Korea in the 1970s, has been benchmarked by many countries. And tens of thousands of public officials have visited Korea to learn about it.

The OECD and Foreign Ministry proposed publishing a policy guide toolkit to make the model applicable to situations in developing nations. The results will be published in an OECD manual and addressed at regional seminars in Asia and Africa, the Foreign Ministry said.

The research is expected to place an emphasis on the importance of social capital in rural growth, such as community leadership and civil participation.

A comparative and analytical study on the Saemaeul Movement will also provide an opportunity to compare it to other rural development projects.

“This event is very symbolic because Korea and the OECD are continuing to work closely together for our common goals to eradicate poverty and promote sustainable development,” said Shin Dong-ik, the deputy minister for multilateral and global affairs at the ministry.

He added that the Saemaeul Movement was a driving force behind Korea’s rural development at a time when 40 percent of people lived in absolute poverty. “A decade later, the movement contributed to about a 10-fold increase in the average income of rural households,” Shin said.