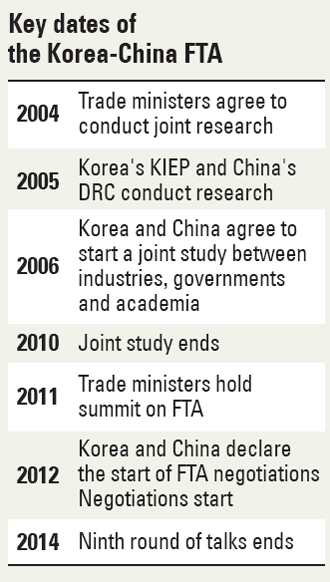 Korea and China remain “significantly distant” on details surrounding sensitive products in the ninth round of talks on a bilateral free trade agreement, the Ministry of Trade, Industry and Energy announced yesterday.

Chief negotiators of the two countries exchanged their offers and requests for the first time since official talks began in 2012.

The latest round of talks wrapped up yesterday in Xian, China.

In the offers, the two countries explicated what products they want to trade freely or at lower tariffs.

The Korean government requested elimination of tariffs on petrochemicals, steel, machinery, IT products, cosmetics, premium home appliances and medical equipment, areas in which Korean businesses have strong competitive edges over their Chinese rivals.

The government also demanded categorizing agricultural products and those of small manufacturers as “very sensitive” to protect farmers and local businesses, the ministry said.

“At the request of China, we can’t reveal details of the offers and requests of the two countries, but its demands are significantly distant from ours,” said Woo Tae-hee, chief FTA negotiator at the Trade Ministry.

Reportedly, China is demanding that Korea open its agricultural market fully with no tariff barriers.

Woo said the negotiation process would accelerate from now on since each side has confirmed the offers and requests.

It is the 20th month since the two nations embarked on official negotiations over an FTA.

Korea and the United States spent 10 months to conclude negotiations. With the European Union, it took 26 months.

“Talks with China are going more smoothly than expected, and we will be able to speed up next time,” Woo said.

If the negotiations are completed, China will be the 11th FTA partner of Korea.

A Korea-China free trade agreement is deemed crucial for Korea to proceed with a trilateral trade pact with China and Japan, which already held two rounds of talks last year.

If the bilateral deal is agreed on for a high level of free trade, Korea could expect its gross domestic product to increase by 1.25 percent within five years after the agreement takes effect, according to research by the Korea Institute for International Economic Policy.

The estimates are based on a forecast that the Chinese economy will expand 8.5 percent each year until 2020.

In November, Korea expressed interest in joining the TPP after being on the fence for a long time because of potential political and economic ramifications.

China is wary of the TPP, which is dominated by the United States and its allies, including Japan, and instead is pushing a so-called Regional Comprehensive Economic Partnership (RCEP) for East Asia.

The Trade Ministry also said yesterday that Korean Deputy Trade Minister Choi Kyung-lim will hold meetings on Monday in Washington with six members of the TPP to decide when Korea might enter the pact.