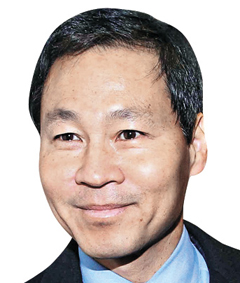 Kim Jeong-hoon, a Korean-American telecom entrepreneur and a former science minister candidate under the Park Geun-hye administration, received the National Order of the Legion of Honor on Tuesday in Washington.

The embassy said that Kim, 53, also known as Jeong H. Kim, was recognized for his contributions to research on global technology and for expanding cooperation with French information and technology agencies as the former president of Bell Labs, the research arm of Alcatel-Lucent, a French global telecommunications equipment company. He also served as chief strategy officer for Alcatel-Lucent.

Kim was inducted as a chevalier in the Legion of Honor by Francois Delattre, the French ambassador to the United States, at an award ceremony Tuesday at the embassy.

The Legion of Honor was established by Napoleon Bonaparte in 1802 and is France’s highest award for excellent civil or military conduct. It is divided into five degrees - chevalier, officer, commander, grand officer and grand cross - and most foreign recipients are awarded Chevalier status.

Kim, who was appointed by President Park Geun-hye as head of the newly minted Ministry of Science, ICT and Future Planning in February, withdrew his candidacy the following month amid controversy surrounding his nomination. Suspicions emerged over that fact that he holds dual American and Korean citizenship and had previous involvement with the U.S. Central Intelligence Agency.

Born in Korea, Kim moved to the United States in 1975 and left home at 16. He received bachelor’s and master’s degrees from Johns Hopkins University and a doctorate in reliability engineering from the University of Maryland. After a seven-year stint as a nuclear submarine officer in the U.S. Navy, Kim founded his own firm, Yurie Systems, a data transmission company, in 1992. In 1998, he sold Yurie to Lucent, which was later acquired by Alcatel the same year for more than $1 billion.

“It appears the French government recognized that I was involved in global research leadership, and Bell Labs added toward the exchange between French research institutes,” Kim said in an email to the JoongAng Ilbo. “It seems like the many years of friendship built with French comrades seems to be recognized. It is personally a great honor.”