The sky is the limit for Apache helicopter pilot

The sky is the limit for Apache helicopter pilot 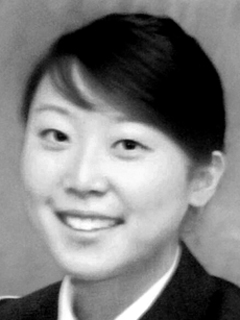 On a recent afternoon last month, an AH-64D Apache Longbow helicopter landed softly on a runway at a the U.S. Army Aviation Center of Excellence in Fort Rucker, Alabama, United States. Two pilots emerged from the rotorcraft, but only one of them stood out.

At first glance, the second pilot was noticeably small and slight - not even 160 centimeters (5 feet 2 inches) tall. And when she took off her helmet, there stood a young Korean-American woman. Although she looks young for her age, 24-year-old Sarah Jeon is a U.S. Army lieutenant.

Lieutenant Jeon graduated from the U.S. Military Academy at West Point in 2012.

In her senior year, she chose to join the army’s aviation branch. Her choice was seen as extraordinary because just a few female cadets have taken that route.

After finishing her studies, Jeon has been receiving pilot training at the Fort Rucker aviation school since August 2012. But before joining to become a pilot, however, she was required to undergo a physical exam.

“To become a pilot, you must be above a certain height,” Jeon said. “Also, your arms must be long enough to be able to control the flight operations.”

“Fortunately,” Jeon added with a smile of relief, “I was able to pass that checkup.”

The Apache that Jeon operates is considered to be one of the helicopters that represents the U.S. Army.

However, it wasn’t easy becoming a pilot. The training was difficult - even some men find it hard to endure. In fact, it’s quite a rare case for a woman to pilot an Apache helicopter. Among the 30 officers in Jeon’s class, she is the lone female. But she doesn’t mind. Being able to fly the craft was her goal from the start.

By keeping a positive attitude, she was able to tolerate the training sessions and even grew to enjoy them.

“Usually training started at 4:30 in the morning and went until 7 p.m.” Jeon said. “There are different classes .?.?. The most difficult training was for the SERE program, which stands for survive, evade, resist and escape.”

Although Jeon is a second-generation Korean-American who was born in the United States, she has great affection for her mother country. She will be graduating from the training school next month and has plans to volunteer in Korea, where she will work at Camp Humphreys in Pyeongtaek, Gyeonggi, starting in March.

She hopes that with this new opportunity, she can learn about Korean culture and become more proficient in the Korean language.

“As a Korean Apache pilot in the U.S. Army, I want to contribute in boosting communication between the Korean and U.S. armies,” she said.