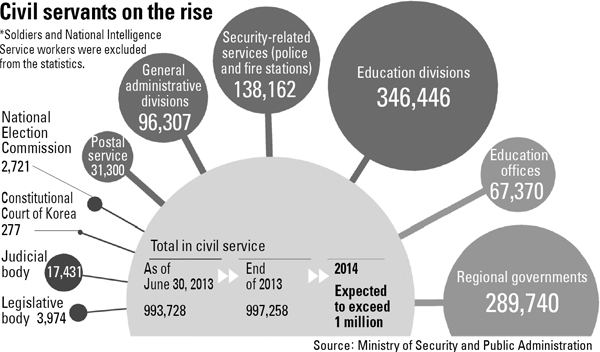 The total number of workers in civil service is expected to hit a record of more than 1 million this year, according to the Ministry of Security and Public Administration.

President Park vowed to increase police forces by 20,000 during her five-year term.

In line with the plan, 4,082 people were recruited as police officers last year, and this year will see a similar increase in new recruits.

More demand for extended welfare services in this rapidly graying society is also driving an increase in the number of public servants.

This year, the government plans to hire 1,177 new officials who will be tasked with dealing with social welfare services.

The call for more welfare benefits also served as the primary impetus for former President Lee Myung-bak to increase the total number of welfare officials. Under the former administration, approximately 7,000 social welfare servants were recruited.

Counting those cases in which workers were on leave, the total number was estimated to have exceeded the 1 million mark last June.

However, excluding absent officials, the figure still stood at 997,258 at the end of December.

Taking this year’s recruitment plan into account, the head count is bound to surpass 1 million within 2014.

Previous governments steered clear of reaching 1 million in part because politicians feared it might give the impression of a big and inefficient government.

And some experts have argued that the government needs to pay more attention to curbing red tape and reining in inefficient bureaucratic policies amid staff expansion.

“The reckless expansion of government can be problematic without proper restructuring efforts,” said Lee Chung-hwan, a professor of public administration at Incheon National University.

“The government should regularly check whether staff expansion translates into better services.”

But the Security Administration said that the current figure is moderate compared to other countries in the Organization for Economic Cooperation and Development (OECD).

“Even if the number exceeds 1 million, it’s far from excessive when taking into account other member countries in the OECD,” said an official at the ministry who spoke on condition of anonymity.

The total number of workers in Korea’s civil and nonprofit service sector accounts for about 5.7 percent of the entire labor force, which is lower than the OECD’s average of 15 percent.

“In a rapidly aging society like Korea, the expansion is inevitable because there are growing voices for better welfare,” said Lim Seung-bin, a professor of public administration at Myongji University.

“What’s more important is if the government dispatches those forces in a way that will increase the efficiency of the system,” he added.

“We need to manage human resources more flexibly and effectively so that they can adapt to the ever-changing social environment,” Lim continued.

When the late President Kim Dae-jung took office in 1998, the number of public servants stood at approximately 888,000. And under the administration of late President Roh Moo-hyun, the figure increased by 2.8 percent to 916,000.