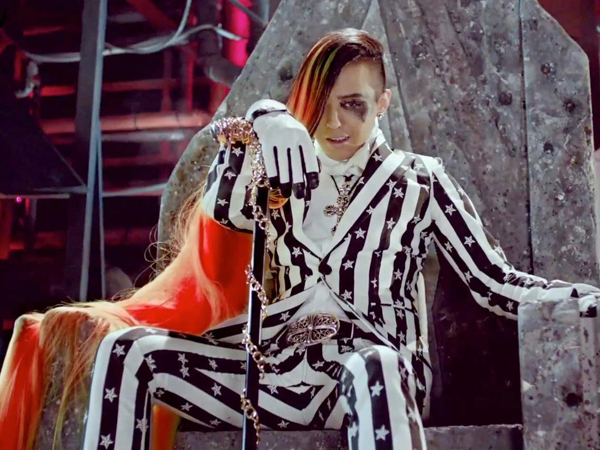 An image from the Big Bang music video “Fantastic Baby.” Though “Gangnam Style” was the No. 1 seller in America last year, followed by “Gentleman,” No. 3 was Big Bang’s “Fantastic Baby,” a song from 2012. [JoongAng Ilbo]

While I was in my hometown of Toronto last month, a bakery opened called Mirotic. No, it was not named after the Montenegrin basketball player who plays for Real Madrid. It was named for the DongbangSingi song.

It has been 18 months since Psy’s “Gangnam Style” blew up all over the world, putting Korean pop music in the public consciousness in a way few would have predicted. Certainly, for someone like me who writes professionally about K-pop, my career has changed a lot.

For years, when I told people I wrote about K-pop, I would generally get confused looks - not always, but often. A few die-hard fans aside, K-pop did not mean anything. Then came Psy.

I did not feel any different, certainly not any smarter, but suddenly I was being asked to give a lot more speeches and write more articles and books. Suddenly, when I said I write about K-pop, eyes would open in recognition - generally followed by being asked if I know Psy (then disappointment when I admitted I never met him).

In many ways, 2013 was a strange year for Korean pop music in the West. On one hand, another Psy song, “Gentleman,” was once again the biggest YouTube song of the year. But somehow, most people considered it disappointing - very strange for 600 million views and the seventh-biggest YouTube music video of all time.

G-Dragon’s album “Coup d’Etat” cracked the Billboard 200 album chart, but making it just to No. 182. On the other hand, G-Dragon was the No. 9 World Album Artist of the Year, followed by Shinee at No. 10.

One of the big problems is that we just don’t have a good vocabulary to talk about fame and popularity in the pop-music world of 2014. What does it mean to have a huge YouTube video but relatively few sales? Or to be popular enough to have concerts for tens of thousands of fans all over the world, but not chart. Clearly, the ideas about music that worked from Elvis to Justin Timberlake don’t really apply in 2014.

One thing that is clear is how much better K-pop has gotten musically. For instance, most of it is in tune now. Re-listening to songs from a decade ago, it is shocking how much of it was flat and pitchy. A musicologist friend of mine is convinced K-pop used to sound out of tune because it mirrored how children sing, and producers wanted K-pop to be cute and childish. I’m not sure how true that is, but I am definitely happy that it is more in tune today.

As with so much of Korean culture, the more it mixes with the world, the stronger it gets. It is scary, competing with the world’s best, but it also produces great results (and, in a globalized pop culture world, plagiarizers get caught so quickly, it’s surprising anyone even tries anymore).

For me, 2013 had a lot of really good songs. SM Entertainment’s Henry Lau is awesomely talented, and his “1-4-3” was incredibly catchy. Jay Park keeps putting out very good music. It was terrible that 2PM’s wonderful “A.D.T.O.Y.” did not do better on the charts. JYJ’s Junsu had a very fun song with “Incredible.” Spica’s “Tonight” was very addictive and their voices were solid. Ailee also had a great voice and some good songs.

But personally, I think the best K-pop song of 2013 was one of the less accessible: CL’s “The Baddest Female.” To me, it’s the kind of song that gets overlooked when it comes out, but four or five years in the future, when fans are at a concert, that’s the song that they go craziest for. It was unique and full of attitude.

I was also really heartened to see Busker Busker once again do so well, and Tiger JK and Yoon Mi-rae, too.

But clearly, 2014 is going to be a fascinating year for Korean music. I cannot wait to hear what comes next.

*The author is an editor of the Korea JoongAng Daily.