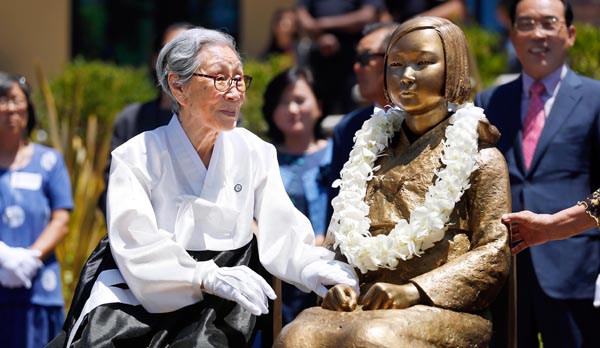 In Washington, D.C., Korea and Japan are waging foreign policy battles online and offline. Korean Foreign Minister Yun Byung-se visited the United States at the beginning of the year, and Japan is to send officials next week. Nobuo Kishi, senior vice minister for foreign affairs and younger brother of Prime Minister Shinzo Abe, and National Security Adviser Shotaro Yachi will be included in discussions about Abe’s Yasukuni Shrine visit.

A memorial to comfort women has stirred controversy online. Many Japanese people posted a petition on a White House website to remove a monument in Glendale, California, for Asian women who were forced to work as sex slaves, while many Koreans are countering with another petition to keep it. The White House promises to answer all petitions that secure 100,000 signatures within 30 days. The Japanese petition has already secured the requirement, so the Korean-American community is similarly working hard to gather enough names.

Washington only sees the continual discord between our two countries. When that discord grows too big, the United States may just seek to avoid the issue entirely. At a news conference after a recent foreign ministerial meeting between Korea and the United States, Secretary of State John Kerry did not discuss the Yasukuni issue. The situation is clear - elevating the level of discord on something that is irrelevant to more important issues may actually help Japan’s position.

For example, the statue for comfort women should be interpreted as a human rights issue. Japan’s claim is like asking to remove a Holocaust memorial in the United States because it makes Germans feel uncomfortable. We would be playing into Japan’s strategy if we responded to Japan’s shameless claim in terms of Korea-Japan discord.

The movement to use the term “East Sea” alongside the “Sea of Japan” needs a more sophisticated approach. The Virginia legislature will discuss a bill whether to use the dual names for the waters between Korea and Japan, and the possibility of passing the bill is higher than ever. Korea’s ruling and opposition parties are giving it bipartisan support. But there are signs of a Japanese counteroffensive. Peter Kim, the president of Voice of Korean Americans, said that the Japanese Embassy has hired a law firm to systematically interfere with the bill. State legislators say that Japan is pressuring them considerably. Now, we need to display our unity and pursue our own lobbying efforts. We need to stress that the use of the two names respects both countries’ claims.

The diplomatic battles in politics and academia should be made with a long-ranged perspective. Israel and Japan are known for their systematic lobbying efforts. We need to create more pro-Korean politicians, officials and scholars.