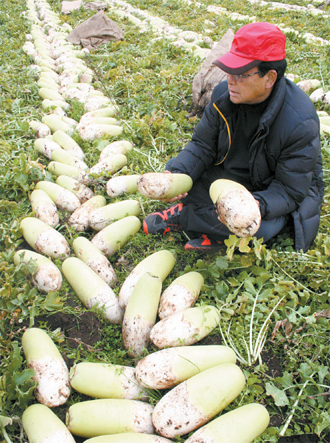 Jeong Gil-nam, a farmer in Seogwipo, Jeju, holds two radishes from his bumper crop. Despite the bounty, Jeong and other farmers would lose money if they sold their winter crops now. Provided by Lotte Mart

“How can one throw away crops that are like his children?” 70-year-old farmer Jeong Gil-nam says with a sigh.

Jeong grows radishes on his 66,000-square-meter (16.3-acre) farm in Seogwipo, Jeju, where 10 gray-haired women in their 70s were squatting to harvest winter vegetables.

The just-harvested radishes stacked in two lines seemed thicker than a man’s lower arm and were milky-white and fresh.

“Each weighs about 2.5 kilograms [5.5 pounds], which makes prices fall because they are too big,” says Jeong. At this time of year, radishes typically weigh about 1.5 kilograms.

Including radishes, winter vegetables like Chinese cabbage, broccoli and carrots account for about 70 percent of the annual income of farms on Jeju Island, and this year has been a good harvest, owing to warm weather conditions until December and little damage from typhoons last summer.

However, farmers feel miserable about their vegetables due to falling prices. Since inland farms also had a bumper crop, Jeju farmers are less competitive in terms of distance, time and cost. Inland production of those vegetables jumped 15 percent to 18 percent from a year earlier, causing prices to go downhill.

It is known as the “paradox of a bumper year” that makes farmers unable to enjoy greater production because they make less money.

“This year, there are radishes everywhere, but we might have to bury them,” Jeong says.

A significant portion of vegetables grown on Jeju, which were supposed to be shipped out in December, are still in the ground. Unless inland radishes and cabbages run out fast, it will be difficult for Jeju farmers to sell their crops at sufficient prices this month.

They can’t expect to reach the break-even point, either.

Radish growers were hit the hardest, with their production increasing to 320,000 tons even though they planted less. 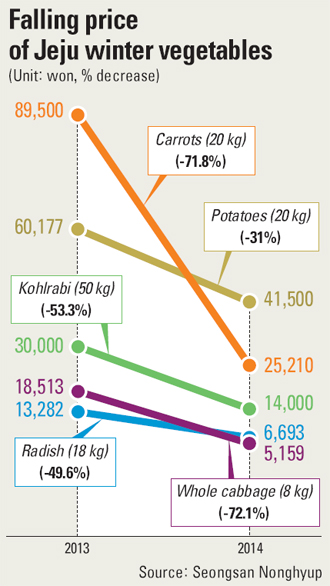 Another problem is that as shipments of Jeju vegetables are delayed, their quality deteriorates.

“A 1.5-kilogram radish of the best quality is priced at 500 won to 600 won, but bigger radishes weighing 2 kilograms to 3 kilograms are 100 won cheaper,” says Lee Jong-cheol, a manager at Lotte Mart. “Bigger ones are supplied to chicken franchisees or other restaurants due to poor quality.”

Jeong Yoon-jeong, a 62-year-old carrot grower in Seongsan, Jeju, is also about ready to cry.

“The old adage ‘agriculture is the prop of the country’ is just an outdated saying,” she says. “I am even waiting for typhoons because vegetable prices are too cheap.” Jeong grows carrots on about 2,000 square meters of land.

According to Jeong, carrot growers who do all the work themselves - not spending extra on labor costs - can hardly earn 7,000 won per 20 kilograms.

“Now many farmers are giving up,” she says.

“The situation is the same for cabbages, radishes, carrots and kohlrabi,” says Kang Hong-kyung, a director at Seongsan Nonghyup. “This time, farmers made a wrong prediction. Before, it was right to harvest early to make up for possible shortfalls in December, but this year the tactic backfired as typhoons didn’t affect production at all.”

The same story goes for seafood. According to the Ministry of Oceans and Fisheries, the total catch of cutlass fish grew 30 percent from January through September last year compared to the same period the previous year.

Since September, the catch even skyrocketed 60 percent year-on-year. However, prices plummeted due to sharply falling consumption as consumers worried about radioactive contamination from Japan.

It was a totally different story from 2009 onward, when cutlass fish were called “gold fish” or “diamond fish” due to runaway prices.

A 10-kilogram box of cutlass fish caught in the waters off Jeju dropped 17.2 percent from 88,000 won in November to 73,000 won this month. Red-tile fish and flatfish prices sank about 30 percent, too.

Jeju Special Self-Governing Provincial Government and Nonghyup are trying to boost prices back to normal levels.

“When prices are below product costs, we ask farmers to throw their crops away,” says Hyun of Nonghyup. The agricultural cooperative recently announced it asked farmers to dispose of crops grown on about 200,000 pyeong (163 acres) of land. Of the total, 60,000 pyeong is in Jeju.

Retailers are holding sale events to try to help the farmers.

Lotte Mart purchased about 50 billion won worth of vegetables and fish from Jeju last November.

“To help adjust the supply of cutlass fish and stabilize prices, we are throwing big sale events,” says Lee Kyung-min, a director at the nation’s third-largest discount store.

From Jan. 9 to 22, 200,000 units of cutlass fish from Jeju will be discounted by 40 percent at Lotte Mart stores nationwide. About 300 tons of apples and 800,000 units of persimmons will also be on sale for 30 percent off at Nonghyup stores.

“Ahead of the Lunar New Year, we are preparing gift boxes made of these abundant crops and fruits to benefit both consumers and producers,” says Cho Yoon-hyung, an assistant at Nonghyup. “It is a better idea than to let produce spoil.”

E-Mart, the No. 1 retailer, plans to purchase 180 billion won worth of products from Jeju next year, up 30 billion won from this year. The retailer pledges to expand purchases of Jeju-grown tangerines, radishes, potatoes, carrots and onions by 20 percent next year.

Lotte Mart also is throwing a half-price sale event through Jan. 22 to help out small manufacturers of winter clothing and accessories whose warehouses are piling up with unsold products amid sluggish private consumption.

“Gloves, hats and other accessories made by small companies are hit hard by negative consumer sentiments,” says Jeong Man-yeon, CEO of a small hat maker.

Lotte Mart asked Jeong to sell his products at half-price.

“Even though it is sad to see my products being sold at 50 percent off, it would be better than keeping them in warehouses. Now I can think about paying my employees incentives for the Lunar New Year holiday,” he said.