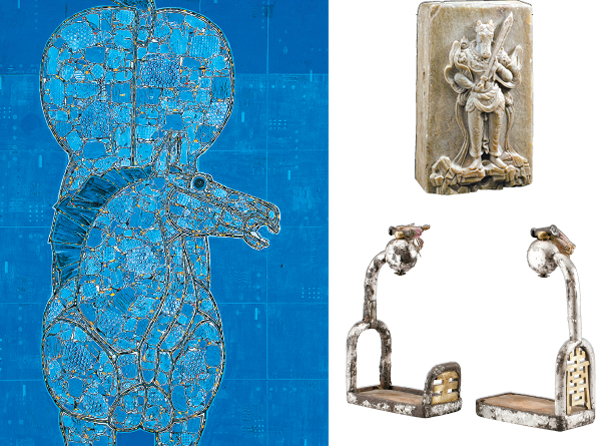 Left: “Horse Creation” by Jang Dong-mun. Right: A Silla-era carving of a horse as one of the 12 zodiac animals. Below: A late Joseon-era type of harness made of gold and silver, presumed to be used by royal families.

There are few animals that are as close to people as horses.

Even after the horses died, Koreans made hats from their manes, shoes from their skin, bows from their tendons and food from their meat. Although horses don’t play such important roles in modern Koreans’ lives, Koreans still call trains cheolma, or steel horse, and gave car models names like Pony, Galloper and Equus.

This year is the Year of the Horse - or, more precisely, the Year of the Blue Horse, according to the Chinese zodiac calendar. To celebrate, museums and galleries in Korea are holding exhibitions dedicated to artworks inspired by the animal.

“In the East, mado, or paintings themed with horses, have been beloved for a long time,” said Seo Seong-rok, an art critic. “Such paintings that depict horses’ handsome appearances and figures were also widely drawn in Korea.”

On murals in the tombs of the Goguryeo Kingdom (BC 37-AD 668), horses supported men in their hunting, food gathering and farming activities, Seo said. 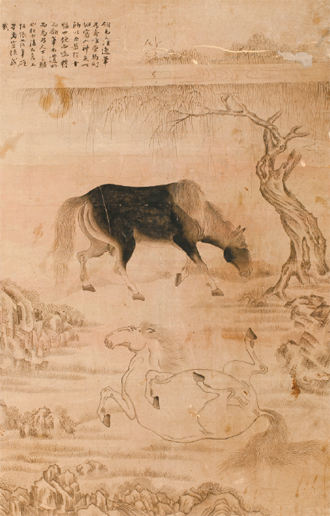 Left: “Horse Creation” by Jang Dong-mun. Right: A Silla-era carving of a horse as one of the 12 zodiac animals. Below: A late Joseon-era type of harness made of gold and silver, presumed to be used by royal families.

At the National Folk Museum of Korea (02-3704-3114 / www.nfm.go.kr) in Seoul, visitors can learn about what horses meant to Koreans throughout history at its special exhibition titled “The Year of the Horse.”

Although there is a notion in Korea that women born in horse years are strongheaded, Cheon Jin-gi, the museum’s director who is known to have a deep knowledge about zodiac animals, says otherwise.

Part one of the exhibition is designed to show how mankind began using horses for transportation by taming them. The relics on display include bits and horseshoes.

The second part of the exhibition seeks to show how horses became a representation of a person’s status, dignity and well wishes through time. For instance, only a person of high class could ride a horse, and horses were traded for two or three slaves.

Also, bridegrooms made their entry on a horse in traditional Korean weddings, and horseback riding was seen as exciting and joyous.

Part three of the exhibition shows how horses were also guides to the dead in traditional Korean lore. Along with the other 11 zodiac animals, horses can be found in funeral biers, decorations and inside the tombs as folk and craft articles.

The exhibition explains that horses were sometimes God’s messengers in Korean myths. In the myth of the birth of Pak Hyeokgeose (BC 69-AD 4) the founding monarch of Silla (57 BC-AD 935), a white horse guides people to a large egg from which Pak was born.

“It’s sad how mankind’s emotional exchange with horses isn’t as strong as it used to be,” the museum said. “Still, we hope visitors learn how the different uses of horses and the lifestyles of Koreans were closely related and evolved together through history.”

Sixty-three relics and folk goods are on display, with the highlights being the bones of a horse from the Bronze Age, a late-Joseon painting titled “Gonmado” and a type of harness made of gold and silver, presumed to be used by royal families.

The exhibition runs until Feb. 17.

Life of a horse

At the Gyeonggi Provincial Museum (031-288-5400 / www.musenet.or.kr) in Yongin, Gyeonggi, an exhibition titled “Worldwide Horse” examines the life of a horse.

“Perhaps because of its multiple roles, horses have many symbols compared with other animals of the zodiac,” Yu Ji-in, one of the museum’s curators, said. “The exhibition shows horses as a representation of ‘abundance and fertility,’ ‘mysterious animal,’ ‘the energy that fights off the evil,’ and ‘royal animal.’”

Highlights include (although it’s not the actual relics but the photographs of them that are on display): earthenware shaped after a horse-riding man discovered from Geumnyeongchong Tomb in Gyeongju, North Gyeongsang (National Treasure No. 91); and Cheonmado or “Heavenly Horse Painting” from the Cheonmachong Tomb also in Gyeongju (National Treasure No. 207) and a horse craftwork found near the tomb of Kim Yu-sin (595-673), a famous general from Silla, also in Gyeongju.

The exhibition runs until the end of December.

If you want to explore more contemporary or international aspects of horses, you can check out the exhibition, “Blue Horse,” being held at Lotte Gallery in Lotte Department Store and Avenuel, both in Seoul.

Twenty-eight artists - nine from Korea, 15 from Mongolia and four from Australia - are displaying their works inspired by the animal.

“While Korean artists display different ways of interpreting what horses mean to mankind,” the museum says, “Mongolian artists have emphasized the dynamic and speedy features of the animal, showing their roots in a nomadic lifestyle.”

Australia, which is the world’s No. 2 producer of horses, is home to about 450 jockey clubs and 330 racetracks, the museum says.

The country’s artists appear to show the ties between humans and horses through their works.

Some 70 pieces of paintings, sculptures and installation artworks are on display.

The exhibition runs until Feb. 3 at Lotte Gallery and Feb. 24 at Avenuel.