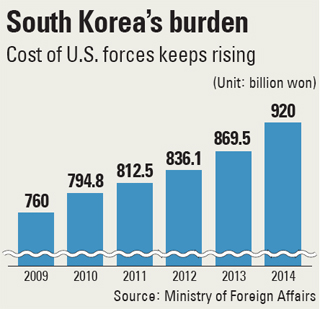 Seoul and Washington have agreed on a five-year cost-sharing plan for maintaining the 28,500 U.S. troops stationed in Korea, in which Seoul will pay 920 billion won ($867 million) in 2014.

Under the new plan, the cost for keeping America’s garrison in Korea will grow annually - but by no more than 4 percent in any year - through 2018, based on a consumer price index.

For enactment, the agreement must be approved by the president at a cabinet meeting and then by the National Assembly.

At an all-night-long session, chief Korean negotiator Hwang Joon-kook proposed paying about 900 billion won in 2014. Eric G. John of the U.S. State Department called for about 1 trillion won because of the U.S. government’s budget sequestration in 2013, sources told the JoongAng Ilbo.

Given the 2011 consumer price index, the standard to calculate the cost was 2.2 percent, so the increase of 5.8 percent for Seoul was higher than expected.

Considering the average consumer price index has been 2 percent to 3 percent annually, Seoul’s payment is expected to exceed 1 trillion won in 2017.

A South Korean official who participated in the negotiations told the JoongAng Ilbo that the increase reflects growing military threats from North Korea and the delay in the shift of wartime operational control over Korean forces to Seoul.

“The cost partially included reinforcement of U.S. forces in terms of sectors that our military doesn’t have and for defense against the nuclear weapons program and missile threats from North Korea,” said a South Korean military official.

South Korea said the agreement was satisfactory, especially because it makes management of the U.S. forces more transparent.

“Although we can’t say it was entirely satisfactory, we obtained quite a lot of things,” a Foreign Ministry official yesterday told reporters at a briefing on the condition of anonymity. “Particularly in terms of funding military supplies, our Defense Ministry will approve every single contract to guarantee transparency.”

When it comes to the opposition Democratic Party’s report, which criticized about 700 billion won of untouched money in South Korea’s budget being managed by U.S. forces, the ministry said the unused money would be spent soon on the relocation of U.S. forces out of Seoul.

“The U.S. side also acknowledged there is some untouched money accumulated,” the Foreign Ministry official said. “But the U.S. forces of Korea and our Defense Ministry judge that most of the money will be spent this year and next [year] on relocation of the U.S. base.”

U.S. forces will submit an annual report on how the money is spent to the National Assembly, according to the Foreign Ministry.

Starting in 1991, the allies have had eight agreements in which South Korea paid about 40 percent of the annual cost for maintaining U.S. forces. The previous one signed in 2009 expired at the end of 2013.