For Good Samaritans of Daegu, it’s all in family

For Good Samaritans of Daegu, it’s all in family 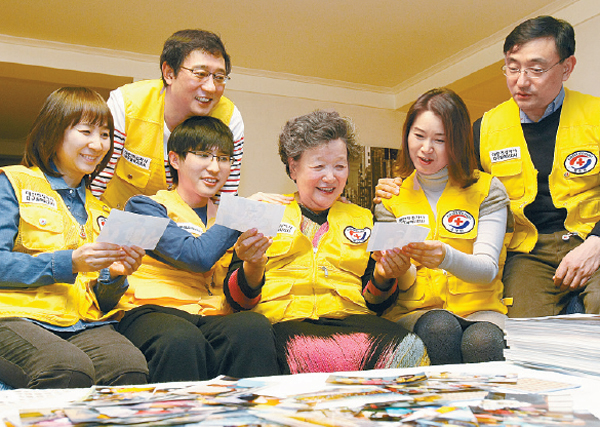 The family of Kim Gil-yun, 76, is famous for four generations of volunteer work. They have won 20 major volunteering awards, including a presidential citation given by the Ministry of Security and Public Administration, and the family’s hours of service to the Korean Red Cross alone totals 21,209 hours.

It all began with Kim’s mother Park Cha-eun, who was touched by the heartbreaking lives of war orphans after moving to Daegu from Seoul in 1954. Even though Park had a large family to support and worked as a humble market peddler, she gave away any rice she could spare.

A tradition was born.

Park started making broth with rice at home for the orphans. From giving out broth, Park started helping orphanages and nursing homes and Kim started accompanying her. The family needed to sacrifice. They lived on a cheap corn powder soup, rather than rice. Park passed away in May 1990.

Inspired by her mother’s spirit of generosity, Kim began helping others when she married in 1978. Saving money from her household allowance, she gave scholarships to five needy children at a local elementary school. After saving up more money, she visited a school for the hearing-impaired and donated scholarships for 20 students. The Red Cross says the money she gave to the two schools eventually added up to about 30 million won ($28,248).

Shin Gyu-chang and Shin Gyu-young, Kim’s sons, are the third generation of volunteers. They well remember their mother being stingy with their allowances but generous toward others. They followed suit. Since 1990, they have supported a school for the handicapped by donating 1.5 million won a year.

They throw free-meal events six times a year. “They have donated 12 million won from 2009, and they are still continuing regular donations of 20,000 won a month,” said Kim Wol-soo of the Korean Red Cross.

But the family’s journey of compassion has not always been smooth. About 20 years ago, Kim was deceived by a woman who asked her for 5 million won, saying she would be forced to sleep on the street without it. Kim borrowed the money and gave it to the woman, who she never saw again. She had been hoodwinked.

She also mentions a girl she supported financially from middle school. She is now married but won’t communicate with Kim, which makes her sad.

The family has two interesting rules. The first one is that they visit nine needy households every month. The second is that they never celebrate their birthdays. On those days, they go to orphanages or welfare facilities and donate food.

“Helping others is like a custom for our family,” says Kim. “I’d say just we do it because it is fun, but I want the practice to be passed down to the next generations.”