Some seniors choose to be freshmen

Some seniors choose to be freshmen 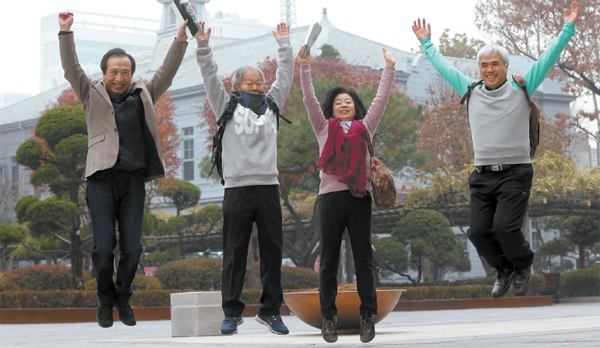 College students aged over 60 show their vitality at Korea National Open University in Jongno District, central Seoul. Increasingly, more silver-generation people are coming to KNOU and other higher educational institutions to continue to find meaning in the final chapter of their lives. By Kang Jung-hyun

Half a century ago, Chun Ki-young headed for the Blue House every morning. He was a presidential economy secretary for Park Chung Hee, the strongman who ruled the country for 18 years and the father of the current president, Park Geun-hye.

Enrolled at Korea National Open University, Chun is pursuing his fifth bachelor’s degree, this time in economics. His previous degrees, in the order of being earned, were in Japanese, English, business and law.

Born in 1930 in South Pyongan Province in today’s North Korea, Chun moved to the South in 1945 and eventually entered the elite Seoul National University. His studies were interrupted by the outbreak of the 1950-53 Korean War. After serving in the Army for more than 10 years, he began working at the Park Chung Hee Blue House.

Afterward, Chun settled into the career that would be his calling: trading with Japan. After he retired, he decided to study Japanese in depth.

“I entered KNOU to study Japanese when I was 69,” says the impressively spry Chun. “If I didn’t restart my studies, I would have ended up wandering around city parks with the other old geezers.”

Chun says he will continue studying as long as his health allows.

Jung Han-taek, is another gray-haired student enrolled at KNOU. He is 92 years old, the oldest student in the institution’s 42-year history. Jung is majoring in Japanese.

Jung is no stranger to the classroom. In fact, he was one of the first scholars to teach psychology at a higher educational institution in Korea, Sogang University. President Park Geun-hye was one of his students in the 1970s.

“I still remember Geun-hye taking notes during my lectures [in the early 1970s],” smiles the former professor.

In 1987, Jung retired from Seoul National University at age 65. But he has no intention to stop learning. “I will keep coming to school well into my 100s,” he vows.

Korea National Open University is open to people from all walks of life and all age groups. For admission, it does not require College Scholastic Ability Test scores.

Increasingly, more silver-generation people are coming to KNOU and other higher educational institutions to bring meaning to the final chapter of their lives.

According to the Korea Educational Development Institute, 18,114 people aged 60 and above were enrolled at colleges in 2012, up more than quadruple the number for 2008, which was 4,594.

Heo Young-nam, 70, is a Vietnam War veteran and a recipient of the Medal of Honor for his service in the conflict. Heo served in the military for 28 years. Last March, he entered Daejeon’s Pai Chai University to study social welfare.

Heo told the JoongAng Ilbo that he opted not to go to college 50 years ago because he failed to win a full four-year scholarship. Before joining the military, Heo worked in a factory to help support his family, a common path taken by high school graduates during the Park Chung Hee government-led industrialization drive.

“I go to school with the grandson of my brother around 8 a.m. every morning,” Heo laughs. He says school has invigorated his daily life.

“With the retirement of the baby-boom generation [born between 1955 and 1963], more and more seniors will seek post-work education,” said senior researcher Lee Jeung-ui at the National Institute of Lifelong Education, a state-run center that fosters education programs for seniors.

Moon Jin-cheol, an official at the student welfare policy team at the Education Ministry, said the increasing number of gray-haired people at universities is a testament to the number of Koreans forced to give up on studying when they were young because of the poverty of the 1960s and 1970s.

“We all now have more years to live as seniors with increased life expectancies,” said Han Jung-ran, a professor of senior welfare at Hanseo University.

“College education could be an effective way of spending the later years of life post-retirement.”