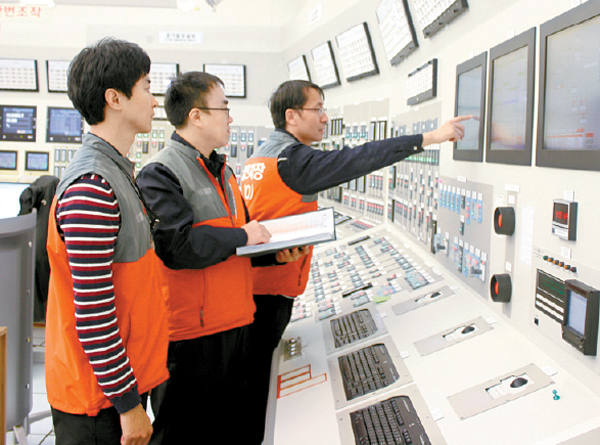 Operating engineers check equipment in the Singori 2 nuclear reactor’s main control room on Friday at the Gori nuclear power site in Gijang County, northeastern Busan. The reactor was restarted Saturday.Provided by the company

On a warm Friday afternoon on the southeast coast of Korea, the atmosphere at the Gori nuclear power site, which covers parts of Ulsan and Gijang County, Busan, was full of excitement and tension prior to the restart of the Singori 2 reactor.

In the Singori 2 control room, engineers were busy checking a dart-patterned dashboard that determines the reactor’s performance-generating capacity step by step.

Some senior engineers huddled in a corner of the room and would not relax until they saw the reactor reach full capacity.

To ensure safety, three teams of five engineers work 24 hours a day at the reactor in three shifts. A camera installed by the International Atomic Energy Agency was capturing videos.

The Korea Hydro and Nuclear Power Corporation (KHNP) announced on Friday the reactivation of the three reactors.

The state-run company restarted Singori 2 on Saturday, and Singori 1 and Sinwolseong 1 in Gyeongju, North Gyeongsang, on Jan. 4.

The reactors had been shut down since inspectors discovered defective control cables in May.

According to a KNHP statement Saturday, the Nuclear Safety and Security Commission on Jan. 2 reported that tests on the new cables and other equipment and procedures had been completed, and the three reactors could be restarted.

The Singori 1 and Sinwolseong 1 reactors reached full capacity on Tuesday, and the Singori 2 reactor is expected to be 100 percent operational by 6 a.m. tomorrow. Each reactor is capable of generating 1,000 megawatts of electricity per hour.

When all three reactors are generating at full capacity, the Ministry of Trade, Industry and Energy predicted they will boost the country’s total energy production to about 84,000 megawatts. The figure is higher than the ministry’s late-December estimate that the winter’s peak power demand would be 80,500 megawatts during the fourth week of January.

Nationwide power consumption jumped to 76,000 megawatts on Thursday as temperatures dropped to below minus 10 degrees Celsius (14 degrees Fahrenheit), but the Korea Power Exchange said the power reserve was stable thanks to the reactivation of the Sinwolseong 1 and Singori 1 reactors.

As the two Singori reactors come online, a total of six plants on the Gori site will produce 45 percent of the energy consumed by Busan, Ulsan and South Gyeongsang, and about 7.5 percent of the nation’s electricity needs.

The restarts bring the total of active reactors to 23, producing a combined 20,727 megawatts per hour. They account for about 27 percent of the nation’s total power capacity.

“Through the resumed operation of the three reactors, the KHNP hopes to regain the public trust and make it a turning point for the company’s management,” said Cho Seok, president of the Korea Hydro and Nuclear Power Corporation. Cho assumed his post in September, after the company’s corruption scandal.

“My top priority is to operate the plants without any further malfunctions. My executives and I will visit the sites as often as possible, and our brand new ‘on-site’ and ‘transparent’ management will start from there.”

The two reactors, with 1,400 megawatts of capacity each, come from the same locally developed model as the one exported to the United Arab Emirates in December 2009.

With this model, the KHNP is also bidding to export reactors to Finland in a consortium with Kepco E&C, Doosan Heavy Industries, Kepco Nuclear Fuel, Samsung C&T and SK E&C.

The Finland project involves construction of a single unit reactor at Olkiluoto nuclear headquarters, which is run by the Finnish private energy conglomerate TVO.

The Korean consortium is competing against the French company Areva, Mitsubishi, Toshiba and a transnational consortium between Hitachi and GE.

According to the World Nuclear Association, the Korean 1,400-megawatt model is slightly smaller than the 1,650-megawatt reactor proposed by the four competitors.

The successful bid was to have been announced by the end of last year, but has yet to be decided.