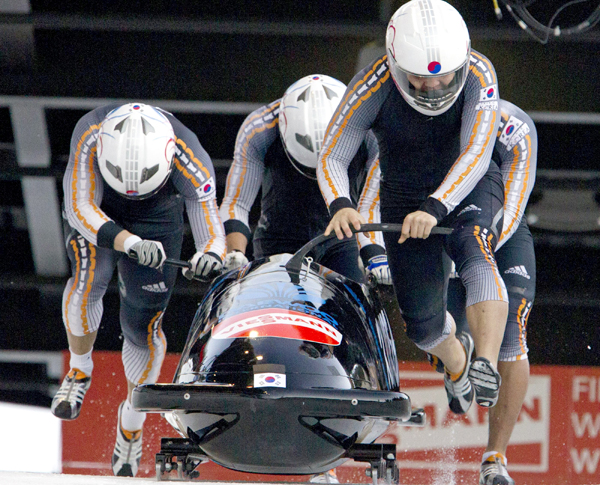 Members of the Korean national bobsled team begin their run on the four-man bobsled at the Bobsled and Skeleton World Cup at Whistler Sliding Centre in British Columbia on Feb. 4, 2012. [AP/NEWSIS]

When Kang Kwang-bae, 41, vice president of the International Bobsleigh and Skeleton Federation, was a junior at Jeonju University, he started riding the luge, the small one- or two-person sled that races downhill with the rider face up and feet first. He represented the country in many international events, but because the luge was so little known in Korea even by other athletes, he was not able to receive any financial support from his country. Kang, who has competed in 20 sled events over the last 20 years, is considered the godfather of Korean luge.

As Kang’s story suggests, Korea has never been very competitive in sledding events, including bobsleigh, skeleton and luge. As the country will host the 2018 Pyeongchang Winter Olympics, the necessary facilities, including the tracks, are under construction, but for the past 20 years Korean competitors have had to practice without decent facilities. Despite such poor conditions, several sled athletes clinched spots last week in the 2014 Winter Olympics, and Korea will participate in seven of the eight sled events in Sochi.

In the North America Cup bobsleigh event held last week in Lake Placid, New York, Korea’s two four-man bobsleigh teams clinched spots to compete in the coming Sochi Olympics. Team A, led by pilot Won Yoon-jong, finished in fourth place with a time of 56.57 seconds, and Team B, led by pilot Kim Dong-hyun, finished in seventh place with a time of 57.07 seconds.

“I’m proud of our athletes, how they have developed themselves into better competitors in a short period of time under poor conditions,” Kang told the JoongAng Ilbo.

Kang’s first Olympic appearance was in 1998 at the Nagano Olympics in Japan, when he competed in a luge event. As Korea didn’t have any training facilities then, Kang went to Austria for training. He worked there part-time to fund his own training.

To participate in the bobsleigh event, he had to scout and find his own teammates. He clinched a spot to compete in luge in 1998, in skeleton in the 2002 and 2006 Winter Olympics, and in the four-man bobsleigh in 2010.

Kang is the only person in the world who has competed in all three sledding events - luge, skeleton and bobsleigh - in the Olympics. After retiring, he became the first Asian executive member of the international federation.

Since then, Kang has concentrated on improving the country’s infrastructure for sledding athletes. He first appealed to the government to build a practice starting block in 2010 at Alpensia Resort in Pyeongchang, Gangwon, the host city for the 2018 Winter Olympics.

“Making a good start in every sled event - bobsleigh, skeleton, and luge - is one of the most important parts of a race,” Kang said. “When I was a player, I tended to do well in the middle and at the end of a race, but making poor starts always prevented me from winning. But after the facility was built, I think that positively impacted our players.”

Kang said that the country shouldn’t be satisfied with just participating in the Olympics. “It will be hard for us to win a medal in Sochi,” he said. “But we must at least finish each event in the top 10 in order to win medals in Pyeongchang, our first time hosting the Winter Olympics.”

Kang hopes these sled events might inspire many people.

“Yoon Sung-bin, a skeleton athlete who won the gold medal in the Intercontinental Cup that was held on Jan. 7, for example, was a kid without a dream,” he said.

“But after he started participating in skeleton, he started living his life more seriously with a specific goal, and made himself the gold-medal winner just 19 months after he started riding skeleton. I see many more players who could be developed like Yoon around the country.”