Clockwise from left: Shortly after Korea loosened its rules on overseas travel, many senior citizens started taking trips. The trips were paid for by their children and it was considered one of the best gifts for parents; Going overseas to hoard goods was a headache for government authorities. Many Koreans returned with lots of alcohol and medical supplies; As seen in this photo of a protest at an airport, whenever the economy was bad, civic groups and activists criticized those traveling overseas. The pickets say, “Stop going overseas to play golf, waste dollars and gamble.” [JoongAng Ilbo]

Beginning that day, any Korean person who wished to travel overseas could do so freely. Before then, only a few special people - such as students enrolled in foreign schools, overseas workers or government officials - could flash a passport, hop on a plane and leave the country.

So much has changed since the Korean government began allowing citizens to travel freely overseas. Jeju Island is no longer the top destination for honeymooners, and Koreans who get off work on Friday evening spend the weekend abroad, sometimes playing golf in Southeast Asia, returning to work on Monday. Many people also spend their holidays not in their hometowns but in exotic locations.

Last year alone, some 15 million Koreans have been estimated to have traveled overseas, which is about one in every three Koreans. That figure is about 20 times the figure in 1988, which was before travel restrictions were loosened. In 1988, that figure was a mere 720,000.

But it’s not just quantitative change but a qualitative one. In other words, Koreans’ travel patterns evolved over time.

For instance, backpacking through Europe was a hot thing to do for college students; lining up in front of the U.S. Embassy to get a visa was a must to visit the United States; and returning from Japan with a Zojirushi rice cooker was also a common sight.

As Koreans celebrate 25 years of being able to travel freely, the JoongAng Ilbo looked at how travel patterns changed over time with the help of about 20 entities including government organizations, travel agencies and airlines. 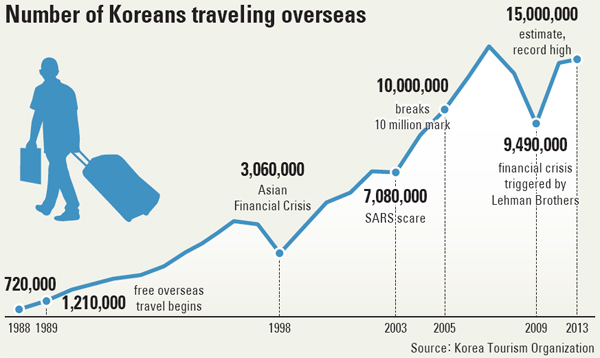 Prove your purpose of travel

Before then, there were a lot of restrictions. For starters, those who wanted to get passports from the Korean government - typically people involved in government, business or academia - had to provide official documents. Not only that, but there was also an age limit as to who could get passports. Only those over the age of 30 were eligible.

In 1985, about 480,000 Koreans traveled overseas. The top destinations were Japan, the United States and Saudi Arabia. Until the mid-1980s, most of the Koreans who went abroad were the “pillars of industry” who ventured to desert countries like Saudi Arabia.

Travel visas were introduced in 1983. But even then, only those over the age of 50 could get one. What’s more, they had to pay 2 million won, the equivalent to paying $5,800 today, in the name of a “tourism deposit.”

“Only a very few, high-class people could enjoy traveling overseas in those days,” Hong Ki-jung, the vice chairman of Modetour, recalled. “For a travel visa, the tourism deposit was quite burdensome. And for a business visa, [the government] reviewed companies’ revenues. So you had to have the wealth and the time to travel abroad.”

One of the most popular destinations during this time was Taiwan. Although China was a nearby destination, Koreans were banned from traveling to Communist countries back then. So China, Vietnam and the Soviet Union were off-limits.

In fact, the Korean government was so concerned that Koreans who traveled abroad would get attracted to Communist ideologies that even until 1992, Koreans had to go through anti-Communist education in order to get passports. 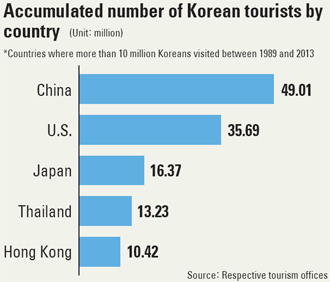 Heyday of backpacking in Europe

The groups of people that got most excited about traveling freely were honeymooners and college students.

Friends of the bridegroom would accompany the just-wed couple to the airport - Gimpo International Airport, back then - and toss the bridegroom into the air and make a fuss.

The excitement was understandable. Before then, Jeju Island was the best destination for Korean honeymooners. But since then, the happy couple could fly anywhere they wanted. Guam, Saipan and Hawaii soon became Korean honeymooners’ favorites. In fact, there was a tour package in which they could visit all three places in a week.

College students, meanwhile, traveled to Europe during their summer vacation. It was considered kind of romantic to pack a backpack, go to Europe, eat baguettes, spend nights on trains and visit as many countries on the continent as possible.

Usually these students traveled to between seven and 10 countries in three or four weeks. To share information, online communities emerged where students could exchange their know-how.

They were nicknamed the “first-generation backpackers to Europe,” and Kim Hee-sun, an executive director at Naeil Tour, is one of them.

“At that time, tour agencies put up posters at university campuses. In fact, that was the best PR they could do in those times,” Kim said. “Students were hungry for experiencing new cultures, and in that sense traveling to Europe during summer vacation was the fantasy of many college students.”

However, as the tourism industry fell into the red after 1991, some people weren’t happy to see others flock to the airport. Overseas travel became a stigma in which people wasted foreign currency and newspaper editorials criticized Koreans for going abroad.

Still, 4.64 million Koreans traveled overseas in 1996, which was four times the figure in 1989, the first year of unrestricted overseas travel. It was also in these times that the term “Ugly Korean” emerged, which refers to Koreans behaving badly overseas and lowering the national image.

But things changed after the 1997 Asian financial crisis, which took a toll on Koreans’ passion for going abroad. Travel agencies went bankrupt. Foreign airliners that had extended their routes to Gimpo withdrew from the airport one after another.

The impact from the financial crisis didn’t last long, though. The economy revived and the foreign exchange rate also stabilized, once again prompting Koreans to travel overseas.

During this era, resort destinations in Southeast Asia like Cebu, Phuket and Bali became crowded with Korean tourists.

And in the mid-2000s, as Korean companies began adopting the five-day workweek, weekend tour packages targeting office workers in their 30s and 40s emerged. Popular destinations in these packages were Tokyo and Osaka in Japan, Hong Kong and Shanghai. Some itineraries made people leave Friday night and come back Monday morning.

Just like the Great Wall of China became the go-to place after Korea and China established diplomatic relations in 1992, Hawaii was the most popular destination in 2008 when the United States began exempting visas for Koreans. Still, Hawaii is a favorite for Korean honeymooners.

But the 2000s also saw some negative elements. SARS, tsunamis, avian influenza and 9/11 emerged as variables, and the 2008 crisis triggered by the collapse of the Lehman Brothers financial services company added to uncertainties in the market.

Since 2010, Koreans have begun to rely less on travel agencies and the tour packages that they have come up with. Industry sources speculate that about 70 percent of those who travel overseas plan their own itineraries.

As websites where people can book flights and hotels of their choices like Expedia and Agoda have become more popular than before, people can now fly on the airlines they prefer and stay at hotels they like. The wider availability of low-cost airlines is also giving a boost to this trend.

“These days, instead of asking where, people ask what they can do there,” said Jeong Ki-yun, a publicist for HanaTour.

Taking advantage of social networking services is another trend these days. Airbnb and Couchsurfing are leading the phenomenon of people searching for lodging themselves, while Contiki and Topdeck help people travel with foreign friends.

According to a survey of 1,000 Korean adults last year conducted by the Korea Tourism Organization, 84.8 percent of the respondents said they plan to travel abroad in 2014. Many of them said they plan to go either in May or October, skewing the summer peak season, indicating that for Koreans, travel isn’t something just for the vacation season anymore.