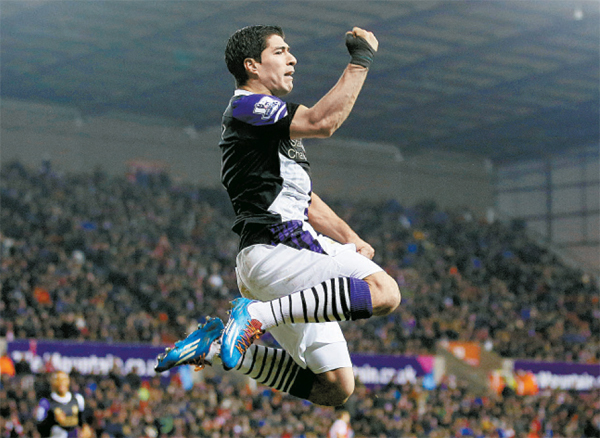 Luis Suarez grabbed a brace and Daniel Sturridge came off the bench to score as Liverpool overcame defensive inadequacies to beat Stoke, 5-3, in the Premier League on Sunday.

Liverpool, which claimed its first league win at the Britannia Stadium, first squandered a 2-0 lead when former Reds Peter Crouch and Charlie Adam canceled out Ryan Shawcross’s own goal and Suarez’s first strike.

Liverpool captain Steven Gerrard put his team back in front from the penalty spot after the interval before Suarez gave the visitors breathing space from Sturridge’s assist.

Jonathan Walters pulled one back to ensure a nervous finish for the visitors before Sturridge, back from injury after nearly seven weeks out, rifled the ball into the back of the net.

After three successive league losses at Stoke, Liverpool went ahead in the fifth minute when Raheem Sterling flicked the ball to Aly Cissokho, with the defender sending a powerful shot that took a deflection off Shawcross to wrongfoot goalkeeper Jack Butland.

The goal came despite Stoke having looked the better team in the opening stages, and Sterling created another good chance when he served up a perfect ball for Philippe Coutinho, but the Brazilian sent his effort from 20 meters over the bar.

Despite a good spell of pressure, Stoke struggled to keep the ball and Liverpool doubled its lead in the 32nd minute when Suarez capitalized on the hosts’ poor defending to score his 21st league goal. After Marc Wilson headed back the ball toward his own goal, the Uruguay striker got behind Shawcross to catch it before showing his technique to beat Butland.

Stoke fought back as Marko Arnautovic crossed a curled ball into the box, with Crouch getting the better of Kolo Toure to pull one back with a precise header.

Crouch did not celebrate the goal against his former club but the Liverpool fans were handed another jab by another Reds player just before halftime as Charlie Adam found his balance after slipping and sent a left-footed shot past keeper Simon Mignolet to draw level.

Wilson was again at fault after the interval when he sent a clearance straight at Sterling, who raced toward the goal before the defender sent him tumbling in the area despite little contact. The referee awarded Liverpool a soft penalty that Gerrard converted by sending Butland the wrong way.

As Stoke got caught on the break, Suarez restored Liverpool’s two-goal lead with a clinical finish from Sturridge’s assist. Sturridge, having come off the bench, drove through the Stoke defense and flicked the ball to Suarez who made no mistake with a curled effort.

But the Reds again let Stoke back in the game as Walters picked up a loose ball in the box and fired it past Mignolet. But Sturridge secured the win two minutes later when he retrieved the ball near the goal line after his initial effort was saved, juggled it and slotted home from close range.

Meanwhile, Manchester City moved provisionally top of the Premier League with a controversial 2-0 victory at Newcastle.

Goals from Edin Dzeko and Alvaro Negredo secured City’s 10th consecutive win over the Magpies as Manuel Pellegrini’s high-scoring team extended its unbeaten run in all competitions to 15 games.

But the result did not reflect the intensity of a game overshadowed by referee Mike Jones’ decision to disallow Cheick Tiote’s apparent equalizer, ruling that Yoan Gouffran interfered with play in an offside position.