Dreaming of a steadfast governor

Dreaming of a steadfast governor 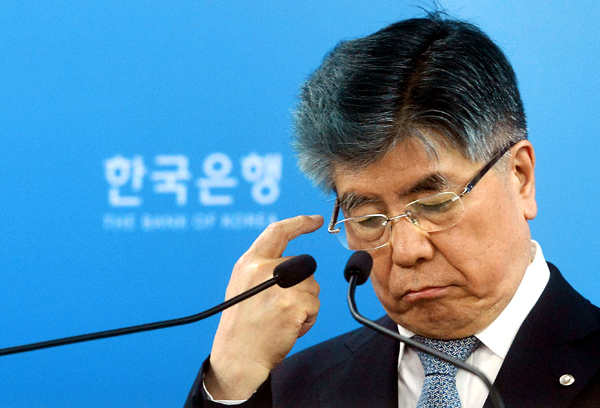 While a Goldman Sachs report on Jan. 6 was a regular occurrence, it left a bitter aftertaste. The investment bank’s report claimed that the Bank of Korea’s Monetary Policy Committee could lower the benchmark interest rate, and the idea was not completely groundless. Abenomics has resulted in a falling yen, but the value of the Korean won keeps rising. That means the price competitiveness of Korean products in the global market is being undermined in comparison to Japanese products. The effects of this can already be seen in the automobile and electronics industries, so some argue that the won’s value should be lowered as well. Fortunately, inflation remains low. The Goldman Sachs report made a convincing claim that the BOK would lower the benchmark rate since it was not under any inflationary pressure. The market fluctuated greatly. On Jan. 6, the value of the Korean won against the U.S. dollar dropped by more than 10 won - that was an overreaction, especially since the report only focused on the values of the won and the yen.

The Monetary Policy Committee immediately tried to sooth the market. At its regular meeting on Jan. 9, the committee members unanimously agreed to freeze the benchmark rate. The storm from Goldman Sachs subsided immediately. But it made people curious: Why did the market act so flustered by the report when it expected no change in the benchmark rate anyway?

The BOK under Kim Choong-soo’s leadership has been swayed by various winds. Market specialists have criticized that the monetary committee does not seem to have any rules on adjusting interest rates and acts inconsistently. Of course, the committee doesn’t need to follow the opinions of market specialists, but it will lose the market’s confidence when the governor says one thing now and another thing later. For example, Kim said last April that “Korea doesn’t need to lower the benchmark rate like America and Japan, which have key currencies.” Then a month later, he lowered the rate, citing the decision of the European Central Bank, puzzling the market.

On Jan. 6, before the monetary committee meeting, President Park Geun-hye announced she would pursue a three-year economic reform plan to boost the market. A Saenuri Party executive member pressured the BOK to lower the benchmark rate to help the economic recovery. Key market players thought that Kim and the committee could be affected by this and, at the same time, Goldman Sachs published its report, confusing the market. The situation illustrates the status of the monetary committee.

The BOK governor has the keys to monetary policy. A new captain will be appointed in early April. There are rumors that someone who shares the administration’s beliefs and who follows the government’s direction will be appointed. Is it too much to dream of a steadfast governor who is not swayed by the administration, is not disdained by the market and works only to protect the wealth of its citizens?

*The author is a new media editor of the JoongAng Ilbo.