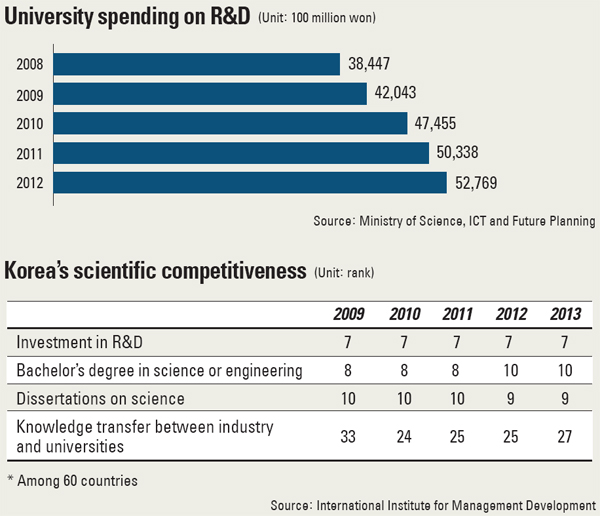 The Park Geun-hye administration is embarking on a concrete project to turn engineering colleges into outposts for her “creative economy” initiative.

The Ministry of Science, ICT and Future Planning announced yesterday it will launch the “college of engineering innovation committee” today in cooperation with the Ministry of Education and the Ministry of Trade, Industry and Energy, as well as scholars and industry insiders.

Park, the country’s first president with an engineering background, pledged more support for engineers. Many of the country’s best science talents have opted for medical school, raising the concern over the stated engineering.

According to the Science Ministry, the committee will steer professors of engineering colleges toward practical projects rather than writing dissertations.

Currently, engineering professors at many Korean colleges are evaluated mainly on the number of papers they publish. The quality of education at the country’s engineering schools also has been criticized. Schools will be encouraged to use more practical curriculums, the ministry said.

In the world scientific infrastructure annual ranking determined by the International Institute for Management Development, Korea was seventh out of 60 countries for the past four years.

Korea also ranked 10th from 2008-11 in the number of dissertations published by science professors. It came ninth in 2012-13.

In knowledge transfer between industry and universities, the country jumped 10 steps to 25th place in 2011, but dropped to 27th last year.

“Engineering schools have advanced research mainly by professors’ dissertations. Through this committee, the ministry would like to diversify the university’s role to three areas: dissertations on basic theories, in-depth curriculum on major areas that students require before entering industry and commercialization of research results,” said Jang Seok-young, head of talent-fostering policy at the ministry. “This is a beginning of the process of strengthening university-industry cooperation and commercialization of research results, which so far has been considered less significant. We will keep putting emphasis on other factors as well.”

In a bid to achieve the goal, the government will make college research funding available using additional criteria such as professors’ performance in the area of technology transfer to industry.

So far, professors and departments could obtain funding by publishing dissertations.

The official explained that the new effort will identify and support professors in areas other than writing theoretical papers.

The committee will be assessed by the National Science and Technology Council meeting, which is scheduled for February, and will become a special committee under the council if recognized. The committee structure will be completed by March.

The Science Ministry also announced it will invest 8.6 billion won to offer practical technology training courses to about 2,000 engineering graduates this year, as part of efforts to foster talent tailored to the industry’s needs.

The ministry expects this to attract more young people to science and engineering.