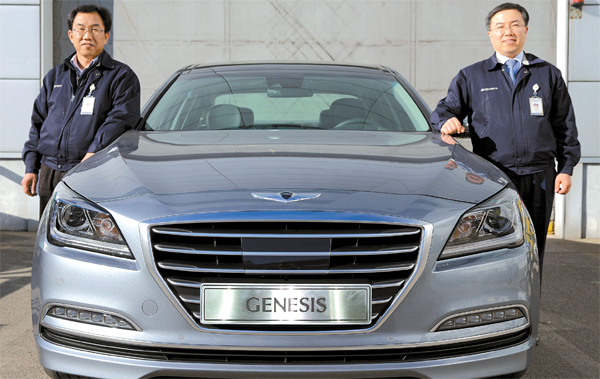 When Park Joon-hong got his first job at Hyundai Motor in 1985, Mitsubishi, a Japanese automaker that had signed a technology alliance deal with Hyundai, was a company to look up to.

Twenty-nine years later, that rookie engineer has become one of the top engineers at Korea’s largest automaker. In fact, Hyundai is now the fifth automaker in the world, surpassing Mitsubishi.

In a reshuffle last year, Hyundai Motor Group created principal research fellow positions for the first time to boost the quality of its R&D. Among Hyundai and Kia’s 10,000 R&D employees, only 13 are research fellows and two - Park and Chi Yo-han - have “principal” in front of their titles.

Both principals are alumni of Seoul National University’s School of Engineering and hold doctorates. Hyundai Motor is the only company that they have worked for.

Park is known as the country’s best ride and handling expert. The 51-year-old said he had to learn to drive all over again when he joined Hyundai to test performance and that the researcher should be almost like a professional racecar driver.

Chi is known as Korea’s foremost diesel expert. The 50-year-old said he learned advanced technology when he was dispatched to the German engine developer FEV in 1997.

“I learned that unlike gasoline engine, diesels’ quality can differ greatly, depending on an engineer’s experience and skill level,” Chi says. “That’s why I started to fall for these engines.”

His successes include the 1,500 cc A engine used in Kia Motors’ Sorento and the U engine in 2004 used in the Hyundai Avante XD and Kia Pride.

But the highlight came in 2009, when his team developed the R engine that produced 184 horsepower, the best in the world among 2,000 cc diesel engines back then. The R engine, Chu says, signaled the next generation of Hyundai’s diesel development.

Both men know their job is to develop world-leading technology and concentrate on R&D, as well as to be effective administrators and managers.

“When we go to a conference overseas, people acknowledge Hyundai and Kia’s success, but they question what the company has contributed to the development of technology in the auto industry,” Park says. “Our task is to develop world-class technology and incorporate that technology into world-class cars.”

Chi added, “I see it as that we need to be responsible for Hyundai going from being a fast follower to a creative leader.”

Both principals think Hyundai and Kia have become serious challengers to the best automakers in the world.

In diesel engines, Hyundai and Kia are in fourth place behind Volkswagen, Renault and Peugeot, according to Chi. However, in the near future, Chi wants the Korean automakers to be producing the world’s best diesel engine.

Park’s goal is to develop a third-generation Genesis that will be a substantial improvement over the soon-to-be-released second generation, which already is receiving acclaim.

These days, some foreign automakers break apart Hyundai vehicles to benchmark technology. But that’s not enough, according to Park, whose dream is to someday have German luxury automaker BMW benchmark Hyundai’s vehicles.

“For the second-generation Genesis, in some parts, we had to compromise with reality and not all the possibilities were used,” Park says.

“For the third generation, we will reduce the weight and add a chassis-control system to boost ride and handling.”