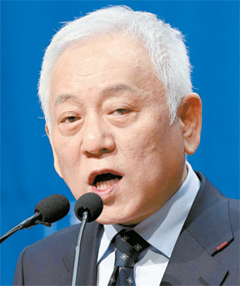 Kim Han-gill, chairman of the Democratic Party, delivers a New Year’s address yesterday at the National Assembly. By Oh Jong-taek

Democratic Party leader Kim Han-gill has thrown his support behind a law to protect the human rights of the people of North Korea, a significant U-turn in the opposition party’s stance on North Korean affairs.

In a New Year’s address at the National Assembly yesterday, the head of the largest opposition party made a series of pledges ahead of the local elections in June, including passing a law to improve the livelihoods and the human rights of people in the Communist state.

“The Democratic Party considers democracy and human rights as the utmost value and also acknowledges problems regarding human rights for the North Korean people,” Kim said in his speech. “The party will arrange a law to improve human rights and the livelihoods of North Koreans.”

In the past nine years, ruling party lawmakers have proposed five bills regarding human rights in North Korea. None were passed due to lack of cooperation from the DP. The U.S. Congress passed the North Korean Human Rights Act in 2004, and the Japanese Diet passed a similar law in 2006.

Ironically, the opposition party, which is very active on various human rights issues in South Korea, was reluctant to support improving the lack of freedom and dire living conditions of North Koreans.

The liberal politicians were worried about criticizing the North Korean government. In general, the ruling Saenuri Party and conservatives have condemned the DP’s silence on human rights in the North.

The abrupt shift came a month after the brutal execution of Jang Song-thaek, uncle and former mentor of the country’s young leader, Kim Jong-un.

Alongside the shift in North Korean policy, the DP leader made a series of pledges to appeal to voters, including ending the party’s factionalism. Kim also vowed to stop using abusive language against rival parties. He acknowledged the competition from independent liberal politician Ahn Cheol-soo, who is preparing to create his own party. Kim called Ahn “a competitive partner.”

“We think many people don’t want our competition against Ahn Cheol-soo to result in the victory of the Saenuri Party [by splitting liberal votes],” he said.

In terms of the local elections in June, Kim put his emphasis on victory in the DP’s stronghold, the Jeolla region, which Ahn recently toured to rally support for his new party.

“Including the Jeolla region, we would win in all of the regions in the country by promoting the best candidates,” he said.

“We hope a law regarding human rights in North Korea is passed within this year,” Yoo said. “Policy making on North Korean issues should not be a source of conflict anymore.”

Still, the two parties are expected to spar over any North Korean human rights bill. The DP wants to emphasize expanding humanitarian aid for North Korean people and disagrees with the ruling party’s idea of supporting human rights activists, who are often North Korean defectors critical of the regime.

“The reason why we have opposed the Saenuri lawmakers’ bills was they were mainly aimed to support civic groups critical of North Korea,” Jun Byung-hun, the floor leader of the DP, said in a radio interview yesterday. “But there would be no reason for us to be against a bill if it is implemented in a way to improve inter-Korean relations.”