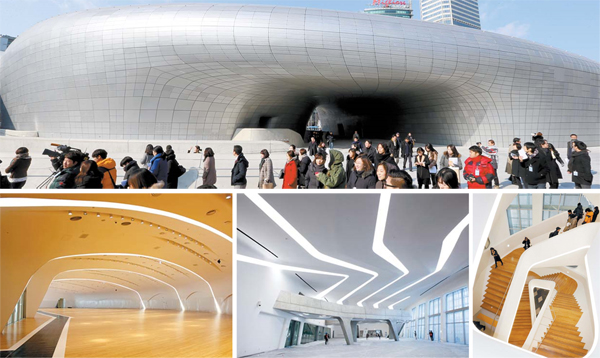 Journalists tour the Dongdaemun Design Plaza (DDP) on Friday. The interior includes a museum space, above left, a design lab space, above center, and a staircase, right, all made of fluent curves. Photos by Choi Seung-sik, Moon So-young and the DDP

Seoul’s controversial new landmark, the Dongdaemun Design Plaza (DDP), was unveiled on Friday, with its public opening set for March 21.

DDP is often dubbed by Seoul citizens as “the silver giant UFO that has made an emergency landing in downtown.” The building, with a floor area of 85,320 square meters (918,377 square feet) on a site of 62,957 square meters, has a fluid form covered with 45,133 aluminum tiles, each with slightly different tones and curvatures.

The building’s interior spaces, on three stories below and four stories above ground, are covered mainly with white glass-fiber-reinforced concrete, making a bright and warm ambience. The fluently curved walls, without any straight lines or pillars, are linked organically.

Experts have generally given favorable reviews about the quality of the building, designed by the renowned Iraqi-British architect Zaha Hadid and built by Samsung C&T for 421 billion won ($398 million).

“The unprecedented design in the history of Korea’s public architecture has been well realized; the complete building seems to have come up to the architect’s original intention,” said Seo Hyun, a professor of architecture at Hanyang University.

Still, many remain worried about the lack of long-term plans for the building, which has been a controversial issue since the Seoul city government launched the project in 2007 under the former mayor. The Seoul Design Foundation, under the city government, said it would hold various exhibitions, including the inaugural “Kansong” exhibition. Eighty artifacts will be presented from Kansong Museum, which owns important Korean artifacts but opens to the public only four weeks per year.