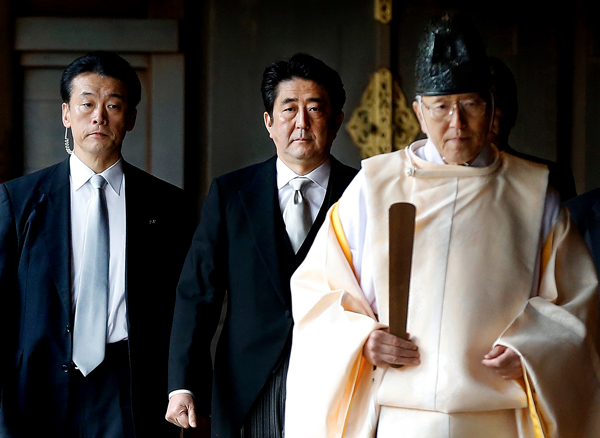 Japan’s Prime Minister Shinzo Abe, center, is led by a Shinto priest as he visits the Yasukuni Shrine in Tokyo December 26, 2013. Abe visited Yasukuni Shrine for the war dead to anger neighbors Korea and China. [REUTERS/NEWS1]

“Have you ever been or are you now involved in espionage or sabotage, in terrorist activities or genocide; or between 1933 and 1945, were you involved, in any way, in persecutions associated with Nazi Germany or its allies?”

This is one of the questions you have to answer in order to receive the ESTA, the Electronic System for Travel Authorization, to visit the United States. The question comes with two others:

“Do you have a communicable disease; physical or mental disorder; or are you a drug abuser or addict?”

Foreigners, including Koreans, cannot visit America if they pose health and security threats or have a history of collaboration with Nazi Germany.

The chance is slim that a Korean worked for the Third Reich 69 years ago. But the U.S. government still asks about the involvement with persecutions perpetrated by Nazi Germany. No one criticizes the question as an act that undermines the relationship with Germany, one of the prime allies of the United States.

Japanese Prime Minister Shinzo Abe’s visit to the Yasukuni Shrine has stirred the world. Fourteen Class-A war criminals executed for planning, preparing, initiating and waging a war of aggression and violating international accords are enshrined at Yasukuni. The Nuremberg trials and Tokyo trials - international tribunals initiated by the United States after World War II - sentenced the Class-A war criminals to death on the same charges for Nazi Germany and Imperial Japan criminals. Abe’s Yasukuni visit was no different than if Angela Merkel paid her respects at the graves of Hermann Goring or Rudolf Hess.

Korea and the international community can’t understand how the United States remembers the crimes of Nazi Germany but suffers amnesia about Japan’s atrocities. America can reference Nazi brutality thousands of times without worrying about harming U.S.-Germany relations. The two countries understand that repenting the faults of the past and working together for the future are two separate issues. Why can’t the U.S.-Japan ties work the same way?

Washington’s defense for Japan is an insult to the 110,000 Americans killed fighting Japan, which attacked Pearl Harbor and started the Pacific War. And it dishonors the military tribunal that defined Japan’s aggression as a crime against humanity.

One of the Class-A criminals enshrined at Yasukuni is Hideki Tojo, who stepped on an American flag to give a speech and called America a “ghost and a beast.” Under his command, the Japanese military forced American prisoners to walk 100 kilometers (62 miles) without a drop of water for nine days in the Philippines, resulting in 15,000 American deaths. “How can the Americans ignore those who would go and pay homage to the memory of Hideki Tojo any more than they would ignore a similar tribute to Osama bin Laden?” asked Dennis Halpin, a scholar at Johns Hopkins University.

Korea never wants to aggravate its relationship with Japan. President Park Geun-hye said at a news conference on Jan. 6 that she considers Japan “an important neighbor to pursue peace and prosperity of Northeast Asia together.”

Despite Park’s stance, Korea-Japan ties were strained due to Japan’s reckless actions and words. And the United States is partly responsible for remaining a spectator.

If Washington continues its lukewarm attitude toward Japan’s ludicrous remarks and acts, Korea and other Asian allies of America will become closer to China - whether they want to or not. If the United States wants to avoid such a nightmare, it should reason with Tokyo. It might lead to some friction initially, but leadership based on common sense could change Japan.

Would it be too much to ask America’s travel authorities to inquire about the involvement in persecutions associated with Imperial Japan between 1910 and 1945?

*The author is political news editor of the JoongAng Sunday.