Tax returns are due in next month, and foreigners get some advantages

Tax returns are due in next month, and foreigners get some advantages 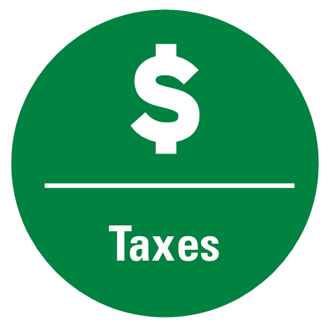 It’s that time of year to go through the shoe boxes and dig out credit and debit card receipts and medical bills for the year-end tax settlement.

According to the National Tax Service, foreign employees who file tax returns will likely reach over 500,000 this year, an increase from the 474,000 foreigners who filed last year.

Documents need to be filed between Jan. 22 and Feb. 15, the same as for Koreans.

While most of the rules apply equally to Koreans and foreigners, there are several exceptional benefits for foreigners.

This year, foreigners are entitled to a 17 percent flat tax rate on their annual wages if they choose it. (A lower tax rate will be available to foreigners with very low incomes.)

This is up from last year’s 15 percent.

In addition, foreign teachers and engineers will be offered special tax relief.

Foreign teachers from countries with tax exemption agreements with Korea will be given an exemption on earnings made from lectures or research during a given period, usually not exceeding two years.

Foreign technicians or engineers who work under a technology-transfer contract or who served as researchers at designated institutions will see 50 percent of their income exempted when their taxes are calculated.

Technicians or engineers who met such requirements before 2010 will have all of their income fully exempted from tax for five years.

There are also limits to deductions on tax returns for foreigners. 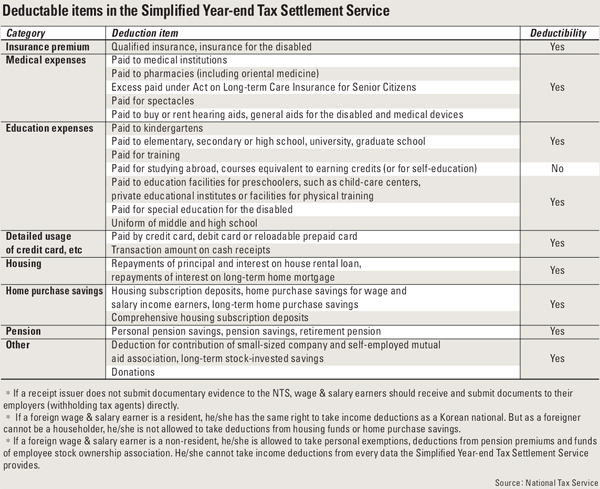 Deductions for various home-related payments such as interest payments on long-term lease apartments, monthly rent and savings exclusively for home purchases will not be available for foreigners.

Additionally, foreigners who are not residents with a home address in Korea will not be allowed deductions in several categories such as medical bills and education payments.

For example, deductions for medical treatment or tuition for schools outside of the country, including day care centers, will be not be accepted for foreigners.

However, deductions for tuition payments made outside the country are allowed if a Korean national made the payments.

Additionally, credit card spending that a foreign resident made overseas will not be included in the tax settlement.

To assist foreigners in filing their tax returns, the NTS has posted an “Easy guide for foreigners’ year-end tax settlement 2013,” as well as an automatic calculation service, on its English-language website www.nts.go.kr/eng.

For the actual documentation and submission of the return, the NTS offers a service at www.yesone.go.kr.

People who have difficulty using the Internet can phone for a consultation at the NTS’s customer service for foreigners at 1588-0560.