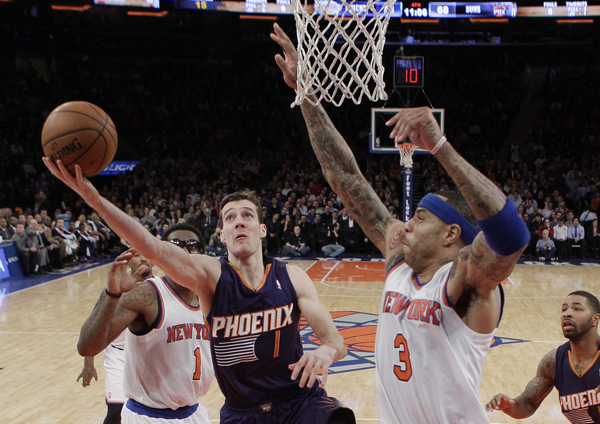 The New York Knicks’ Kenyon Martin (3) moves to block a shot by Phoenix Suns’ Goran Dragic (1) during the second half on Monday in New York. The Knicks won the game, 98-96. [AP/NEWSIS]

Carmelo Anthony had 29 points and 16 rebounds, and the New York Knicks held the Phoenix Suns without a field goal in overtime to win, 98-96, on Monday night for their fifth straight victory.

Anthony scored four of the Knicks’ six points in the extra session, and New York allowed only four free throws while forcing the Suns to miss all seven shots.

Raymond Felton added 19 points for the Knicks (15-22), who climbed into a tie with Brooklyn for eighth place in the Eastern Conference.

Goran Dragic had 28 points and eight rebounds for the Suns, who dropped their third straight. Leandro Barbosa scored 21 in his best game since rejoining his old team on a 10-day contract.

But the Suns endured dreadful games from starters Gerald Green (2 of 16) and Channing Frye (3 of 12) and ended their road trip at 1-4.

Playing their fourth straight game without Tyson Chandler because of bronchitis, the Knicks beat a Western Conference team at home for the first time in seven chances and improved to just 7-12 overall at Madison Square Garden.

Despite their miserable start to the season, they can continue climbing the rest of January, as they open an eight-game home stand on Friday.

The Suns ran off nine straight points midway through the fourth quarter to open an 88-83 lead on Barbosa’s jumper with 4:50 remaining. The Knicks recovered to regain the lead on Felton’s 3-pointer from the corner with 53 seconds to play, and after Gerald Green and Anthony traded misses, the Suns had one final chance.

Though Kenyon Martin appeared to have his hand on some of the ball, a foul was called and Barbosa sank both free throws with 1.2 seconds left. J.R. Smith, who beat the Suns on a jumper at the buzzer last season, was long on a chance to do it again.

Martin found Anthony for a basket to open the scoring in overtime, then dunked a missed shot to make it 96-92. The Knicks could only manage Anthony’s turnaround jumper with 2:41 remaining from there, but it didn’t matter because the Suns couldn’t get anything.

Phoenix compounded its problems when Frye made the second of two free throws with 2.5 seconds left, leaving the Suns down 98-96 without a timeout left and unable to get another possession.