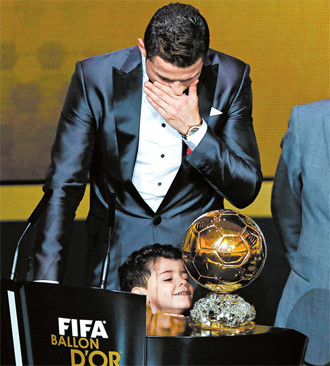 Portugal’s Cristiano Ronaldo reacts beside his son Cristiano Ronaldo Jr. after being awarded the FIFA Ballon d’Or 2013 in Zurich on Monday. Ronaldo was named the world’s best footballer for the second time. [REUTERS/NEWS1]

Cristiano Ronaldo couldn’t hide how much it meant to him, finally being voted the world’s best player again.

Having spent four years in the shadow of his great rival Lionel Messi, Ronaldo broke down in tears after being elected the Ballon d’Or winner for 2013 on Monday - a rare display of emotion that showed just how important it was for the Portugal winger to lay his hands on the trophy again.

Ronaldo first won football’s biggest individual prize five years ago, but then watched as Messi found a way of upstaging him each year despite consistently scoring at an unprecedented rate for Real Madrid.

“There are no words to describe this moment,” said Ronaldo, crying openly while his 3-year-old son, also named Cristiano, stood at his feet. The little boy had just been hoisted by Brazil great Pele to touch the golden trophy as his dad prepared to speak.

“People who know me know how many people helped me,” Ronaldo said in Portuguese. “If I have forgotten anyone, I do apologize because I am deeply moved.”

Ronaldo’s stunning hat trick against Sweden in a decisive World Cup playoff in November also appeared to stand out as the year’s defining individual performance.

“If I win, fine. If I don’t, life goes on,” he said, acknowledging that Messi’s sustained excellence for Madrid nemesis Barcelona had pushed him to improve.

Ronaldo also said he has made peace with FIFA President Sepp Blatter, whose ill-judged comments in October stating a preference for Messi seemed to confirm a long-held belief in Portugal and Madrid that their player was destined to lose.

“We talked over the telephone and everything was cleared,” Ronaldo said before the ceremony. “This is no longer an issue, neither for us nor for football.”

In a tight race, Ronaldo received 1,365 points, Messi had 1,205 and Franck Ribery, the France and Bayern Munich winger, got 1,127. Voting was done by national team captains and coaches, plus selected journalists in each FIFA member country.

On hearing his name called - finally delivered by Pele after a dramatic pause and smile - Ronaldo closed his eyes, grinned and dipped his head, then turned to kiss his girlfriend, model Irina Shayk, before walking to the stage.

Pele greeted Ronaldo with a hug, minutes after he also cried on stage when collecting an honorary Ballon d’Or for his own outstanding career.

Ronaldo’s victory was fitting on an evening when FIFA paid tribute to another great Portugal forward, Eusebio, who died last week.

FIFA also stressed that Ronaldo’s win owed nothing to an extension of the initial balloting deadline beyond the World Cup playoff. His display in Stockholm was so impressive it seemed certain to sway voters when Messi was sidelined by his third injury of the year.

Though Ribery lost, Bayern got one victory as Jupp Heynckes won the coaching award for leading the team to a Champions League, Bundesliga and national cup treble last season before he retired. Heynckes defeated Juergen Klopp of Borussia Dortmund and Alex Ferguson, who retired after winning another Premier League title for Manchester United.

Zlatan Ibrahimovic won a fans’ online vote to get the Puskas Award for best goal, a long-range bicycle kick for Sweden against England in a November 2012 friendly. AP