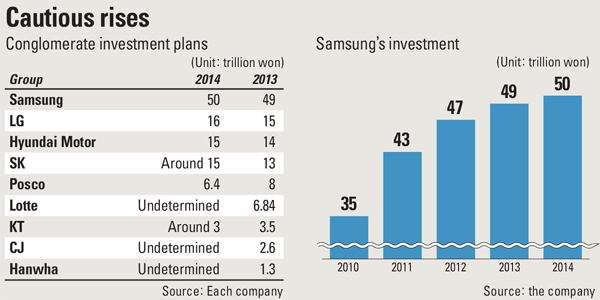 Lee told reporters after the meeting at the Seoul Plaza Hotel that the group plans to hire as many people as last year, despite the generally sluggish economy.

LG Electronics CFO Jung Do-hyeon said his company might expand its investment slightly more than it did last year, from 15 trillion won to 16 trillion won, which is a nearly 7 percent rise. He also said its level of new hires will be about the same as last year.

While conglomerates in the electronics, auto, shipbuilding, retail and solar industries said they plan to expand investment to go into new markets and gain more of their current market share, groups suffering from liquidity and other business problems had trouble setting specific investment plans for this year.

Hyundai Motor Group has a plan to invest around 15 trillion won this year; 1 trillion won higher than last year.

In particular, it plans to expand investment in research and development, including in the creation of eco-friendly hybrid cars. It also plans to construct four factories in China.

SK Group plans to invest around 16 trillion won, which is 3 trillion won, or 23 percent, more than last year. Spending will be in the petrochemical and semiconductor sectors.

CJ, Hyosung, Hanwha and Hyundai groups, which are suffering from liquidity problems or issues such as their chairmen undergoing criminal trials, or even being prosecuted, are in flux over investment plans for this year. Some of them have frozen last year’s investment amounts.

Trade, Industry and Energy Minister Yoon Sang-jick said he will try to ease regulations because investor sentiment will not improve without reform.

“I will set the year 2014 as the first year for regulatory reform and focus all our abilities in creating an investment-friendly environment,” said Yoon.

At the meeting, a spokesman for the Korea Chamber of Commerce and Industry said that while macro economic indicators seem to be improving, the actual economic conditions for companies have not improved.