Top female prosecutor has long been a mentor for many

Top female prosecutor has long been a mentor for many 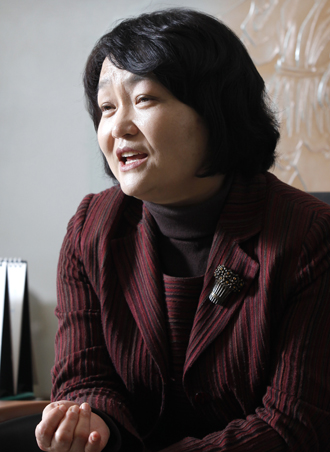 Cho Hee-jin was 28 years old and fresh out of the prestigious three-year Judicial Research and Training Institute when she joined the prosecutors’ office in 1990.

Of all the new graduates to join the office that year, Cho was the only woman. In fact, she was the only female prosecutor in Korea at the time and just the third woman ever to join the prosecutors’ office. Twenty-four years after Cho began her public service, she is still pushing through the glass ceiling, setting new standards for what a woman can accomplish as a prosecutor.

“I was the third woman ever to become a prosecutor in the history of the prosecution, and the only female in the organization in 1990,” Cho told the Korea JoongAng Daily in an interview on Dec. 31 at her new office in Seocho District, southern Seoul.

Known for her calm, soft-spoken voice, Cho has an understated style despite being a veteran prosecutor of 24 years and is considered a mentor to Korea’s growing field of female prosecutors, which today numbers 486.

But back in the early 1990s, when women fresh out of university frequently got married and became full-time housewives, Cho said she was often mistaken by outsiders as being an office clerk assisting the male prosecutors.

“When I went to lunch with my colleagues, I was always asked by restaurant servers to pass out the bowls of rice because I was the only woman,” Cho said with a gentle smile.

“It was a time when it was uncommon for restaurant servers to treat female customers the same way they treated men.”

Cho said that when she questioned suspects in her first years as a prosecutor, there were many occasions when suspects looked down on her, particularly much older women.

“They would say things like ‘How dare you try to interrogate me?’?” recalled Cho, laughing.

Cho remembers one case she handled that made her male colleagues giggle.

“It was a theft case in the early 1990s by a young woman who stole some cosmetic products. As the value of the stolen goods was not that high and it was the first time she had committed the crime, I decided to drop the case,” she said.

In Cho’s statement of why she was releasing the suspect, she wrote that the crime was caused by “her desire for more beauty,” a desire Cho stated should not be indicted.

“My supervising prosecutor at the time told me while laughing that he never had seen such a statement in his entire legal career,” recalled Cho.

One of her most memorable cases occurred in the early 2000s, involving a Filipino worker illegally employed in a Korean factory who had been raped by the factory owner.

“She had been raped twice and even had an abortion. When the police investigated the case, the owner had an alibi on the days of the rape,” said Cho.

“The alibi had been made up, as he had his factory workers give false accounts to the authorities, causing the police to drop the case. But I could not understand the reason why [she and her husband] had pressed charges against the factory owner, which put them at the risk of deportation because of their illegal status.”

Cho described how this happened during the time when mobile phones were just becoming popular.

“Because I had suspicions about the owner, I proposed using a location-search service with the help of the mobile phone carrier. As a result of the location search, we proved his alibi was false and indicted the owner on charges of rape.”

The mother of a son, Cho said she had to rely on her own mother to help look after her child while she worked, like many of other women. After giving birth, Cho’s health suffered seriously enough that she thought about leaving the prosecution.

“My weight dropped some 30 kilograms [66.1 pounds] and my digestive system was not functioning well.”

But she stayed at her job because she says she felt a sense of responsibility toward the other female prosecutors who were struggling to carve out careers and who regarded Cho as a mentor.

“There were a lot of expectations on me to stay in the prosecution because there were too few women in it,” said Cho, adding that she did not consider staying a personal choice because leaving would have affected so many other women in the organization.

“As a woman, I understand it is both challenging and very important to balance life as a wife and mother and as a worker. I want to encourage young women to give their best to achieve the right balance.”

Times have changed since Cho joined the prosecutors’ office in 1990 and so have the perceptions of women’s roles in society. The elite, 1,900-member investigative body now has 486 female prosecutors. And, of course, Korea elected its first female president, Park Geun-hye, in 2012.

“The time has long gone since it was recommended for prosecutors to stay overnight for work or to conduct a coercive questioning [to frighten suspect into testifying],” said Cho.

“In that regard, female prosecutors can excel in investigative areas that require high meticulousness and concentration.”

Asked why she has stayed in the prosecution for 24 years, Cho said she enjoys the puzzle-solving aspect of the work.

“Investigating a case is just like putting together all pieces of mosaic,” she said. “You try to find the evidence to prove someone’s guilt or innocence. And when you are finished putting all these pieces in place, you have the whole picture.”

Cho also noted that, with the complete picture, she often sees how society works for people from all walks of life.

“When I have that whole picture after putting together the puzzle and bringing the case before justice, I feel both proud and very much humble.”