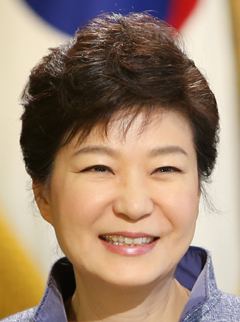 President Park Geun-hye urged Japanese leaders to honor their predecessors’ apologies for colonial rule and other past misdeeds in an interview with CNN, particularly the so-called Murayama and Kono statements.

“We were able to move forward with Korea’s relationship with Japan over the years,” said Park in the interview that was broadcast Monday, “because Japanese political leaders have clearly stated their correct understanding of history through the Murayama and Kono statements.”

Since the return to power of Shinzo Abe in December 2012, concern has been raised by Japan’s neighbors due to some of his several right-wing plans, including amending Japan’s pacifist Constitution and disavowing the Murayama Statement.

The Murayama Statement, an apology made by then-Prime Minister Tomiichi Murayama on Aug. 15, 1995, the 50th anniversary of the end of World War II, was considered Japan’s official position regardless of which political party was in power. It apologized for colonial rule and past aggressions, describing them as “these irrefutable facts of history.”

However, last April Abe maintained that the term “aggression” was not defined internationally or academically and suggested a revision to the Murayama Statement.

He also proposed a review of the 1993 statement by Chief Cabinet Secretary Yohei Kono that apologizes for the damage caused by the Japanese government’s recruitment of Asian women to serve as sex slaves for its military.

Abe further promised a very different kind of statement for the 70th anniversary of the end of World War II in 2015.

Park told CNN she hopes “the current Japanese leaders will make sure they inherit the Murayama and the Kono statements and refrain from words and acts that put their sincerity into doubt.”

Relations between Seoul and Tokyo have deteriorated over the past year due to historical and territorial tensions, topped off by Abe’s internationally criticized visit last month to the controversial Yasukuni Shrine, which pays tribute to war dead including Class-A World War II war criminals.

When asked about the lack of communication between herself and Abe since both took power, Park said she hopes to move toward a “future-oriented relationship with Japan based on a correct understanding of history,” adding that she would like to leave “a legacy of being able to work together” to future generations.

Park also discussed the execution of North Korean leader Kim Jong-un’s uncle Jang Song-thaek, saying it “has come as a huge shock to the Korean people, as well as the world.”

While voicing concern that the “level of unpredictability has in fact exacerbated” in North Korea, she maintained that she is open to meeting with the North Korean leader at some point in the future, if the need arises.

But she pointed out that the South prioritizes national security at a time of growing uncertainty and unpredictability in Pyongyang.

Park said Korea’s Ministry of National Defense, as well as international experts, suggest there is a possibility that Pyongyang will attempt further provocations or an attack in the coming months. She said that the possibility “speaks to the gravity of the situation.”

When asked by CNN whether the purging of Jang was an action of a leader who has a firm grip or one still struggling to take control, Park responded that “it can be indicative of both scenarios.” She elaborated, “Indeed, the purging temporarily strengthens Kim Jong-un’s power, but it can also signal greater vulnerability in the system.” The interview came ahead of Park’s four-day state visit to India starting today, the first foreign journey of the new year. She will travel to Switzerland afterward.